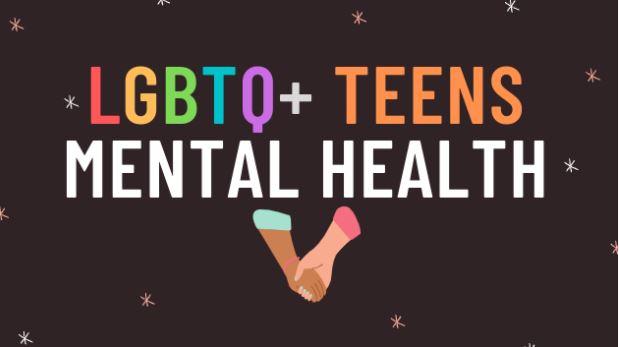 While the world is getting more precise and educated, some others stay behind. Now that more people are coming out in the LGBTQ+ community, many more are accepted now than years ago. The problem is with this, many people who don’t understand will assume LGBTQ+ teens have it easy.

Mental health in teenagers is a very important thing. Having a good mental health can lead to better decision making, positive thinking and more that leads every teen into adulthood. Being a part of the community can already be very draining for a teen to think about. They aren’t sure of their orientation or identity, so not accepting them after taking a long time to find out who they are plays a huge role in their health, physically and mentally.

When I grew up as a kid, I was taught the way things should be. You will be smart, pretty, get a husband and have children. Growing up with that thought though? It had a huge impact. I found out I am a transgender male during sixth grade summer, but knowing I was supposed to be something else for the sake of my family, my mental health went so low. I can’t really remember how much I struggled. I know it was really hard for me, but I can’t even tell you how I got through it. After months of worrying what my family would say, I told a family member.  “I am Transgender and Bisexual. I am a boy, and I like girls and boys.” He was supposed to keep it secret, but after a few days, almost the whole family knew, and I couldn’t do a single thing about the situation I was in other than wait.

This made my first years of middle school a living nightmare. I learned that most of my family didn’t know who I was anymore, and they hated it. Because I was so “little” and “immature” I couldn’t possibly know that I was a boy, but in a few years,  their logic was I should know exactly what job, house and car I want. I struggled with making friends and bonding with people knowing the fact that they probably wouldn’t support me, and I didn’t want to deal with more stress than I had to deal with. Family and school was hard enough already. Having people by my side scared me more than doing anything else, and it’s sad that I was more afraid of talking to people about my own identity and sexual orientation then doing a solo for the chorus group.

Teenagers shouldn’t have to worry what their parents will say because their parents don’t accept who they are or what they will be when they grow up. School is already hard enough with bullies, grades, getting in on time, being on time and the anxiety of being there in general so why should we struggle more with parents, family members and even peers with what we are because we’re afraid of how they react to it. Mental health is a serious thing for all teenagers, so LGBTQ+ teens should have more awareness on how much they have to deal with. I know if I had more support and more education on who I was and who I can be, I wouldn’t have struggled as much as I did while I was only 13 to 14 years old. Parents should also be more educated through the years on how teens can be and what their identities can do to them especially when they’re trying to go through school years with everything else going on in their life.

I am now a 16 year old transgender male who is gay, and I am proud of who I am. When I was younger, I wasn’t proud of that at all. I thought it was more important to believe what my family believed, then what I thought about myself. That tore me apart to pieces. To this day, I still help teenagers find out who they are and what they may be by talking to them, reaching out to them and letting them reach out to me anytime they need me. I find it more important though that teenagers are able to reach out to their parents instead of a random stranger they meet at school for a day. It breaks my heart to know that there are parents who still hate their children just because of an orientation or an identity that makes them comfortable with who they are.

The only advice I give to people who are not understanding or accepting of these children is to just research. Research is very important especially if you don’t understand what your child means when they come out or how you should react to them coming out. Teenagers aren’t too young to be gay, bi, pan or transgender. They are growing, and they know a lot more about themselves than you do, so don’t be too quick to judge. Parents should be more worried about their kid’s future than who their kid is as a person.