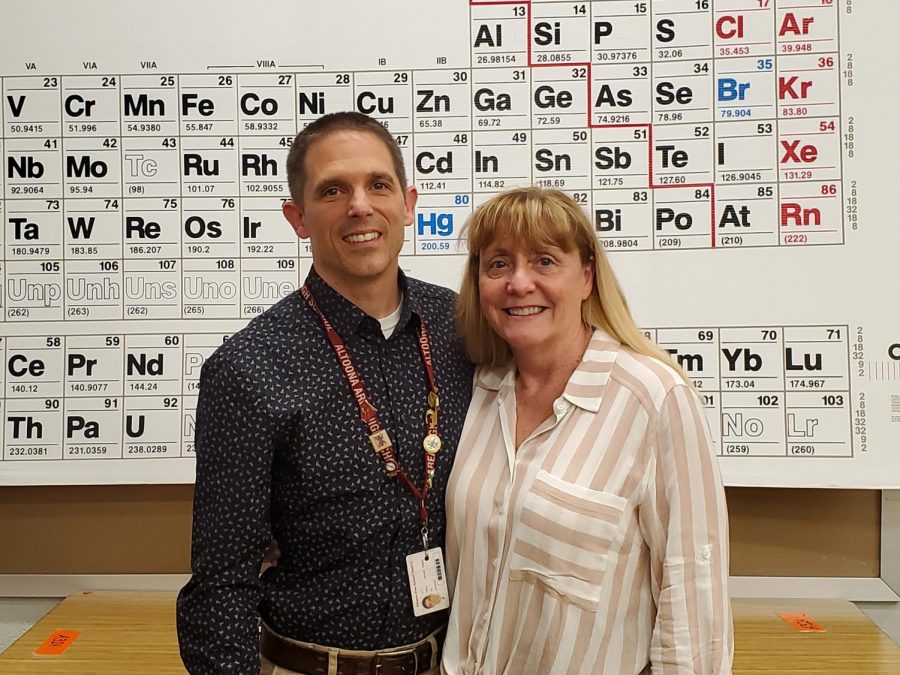 P. Sohmer has always wanted to be a teacher. J. Sohmer had other options.

“I have no idea what I would have done if I didn’t become a teacher because this is all I’ve ever wanted to do,” P. Sohmer said.

“If I wasn’t a teacher, I probably would’ve worked in industry as a chemist,” J. Sohmer said.

The Sohmers met during a chemistry demonstration.

“In 1993, I was working for Juniata College’s Science in Motion Project, which is an outreach to local high schools. We reached out to all of the local high schools in Central Pennsylvania, Altoona being one of them. I was the chem van guy, so I brought instruments and equipment into the high schools and one of the places that I did a demonstration was Altoona High School. Down in what was then room S306, which was then Ms. Patty Logan’s room, I did demonstrations in her room for her class. I then asked my boss, ‘Hey, do you have her phone number?’ Back then there weren’t any cell phones, and when I called her house I got her mom on the phone. When I called a couple days later and said to her, ‘Hey, this is Joe Sohmer. Wait, do you know who this is?’ and she just said, ‘Nope.’ I told her who I was and asked her to dinner. We ate at the Olive Garden because I knew where it was. I thought she was cute,” J. Sohmer said.

The Sohmers keep themselves busy during the summer they have off together.

“We have pursued a lot of hobbies in the summer like canning, gardening, he does welding and we do some rehab in some places. We also fix up our house. We hike, white-water raft, camp, fish, kayak, anything outdoors,” P. Sohmer said

“We do a lot of camping without family so we have a lot of fun vacations where we are both off and don’t have to schedule anything,” J. Sohmer said.

The Sohmers enjoy their time together during the day.

“It’s nice to have someone heat up your lunch for you. Driving together is nice. He jokes that we are together all the time, but we pretty much are. We easily see each other once or twice a day between classes or in other instances. Our rooms are just right down the hall from each other. Sometimes we just stand at the door and wave. When our first daughter was born, I would come in during lunchtime when I was on maternity leave, so we got to spend time with our daughter here. She is now almost 24,” P. Sohmer said.

“While teaching in the same school, it’s good for us to be able to discuss what is going on in the classroom or with the administration. We have a common interest in what is going on inside the building. We also teach the same subject, so we can feed ideas off of each other on how to better present the material we are teaching,” J. Sohmer said.

P. Sohmer remembers the time they shared a classroom together.

“One year, we had to share a room. That was not a good idea. We asked to never share a room again because I like everything very orderly, and he doesn’t share the same philosophy in that way,” P. Sohmer said.

J. Sohmer remembers the times they combined their classes.

“We combined our classes and did a liquid nitrogen show for them. She does a lot of the background work for that, and I do the presenting,” J. Sohmer said.