Be an upstander, not a bystander 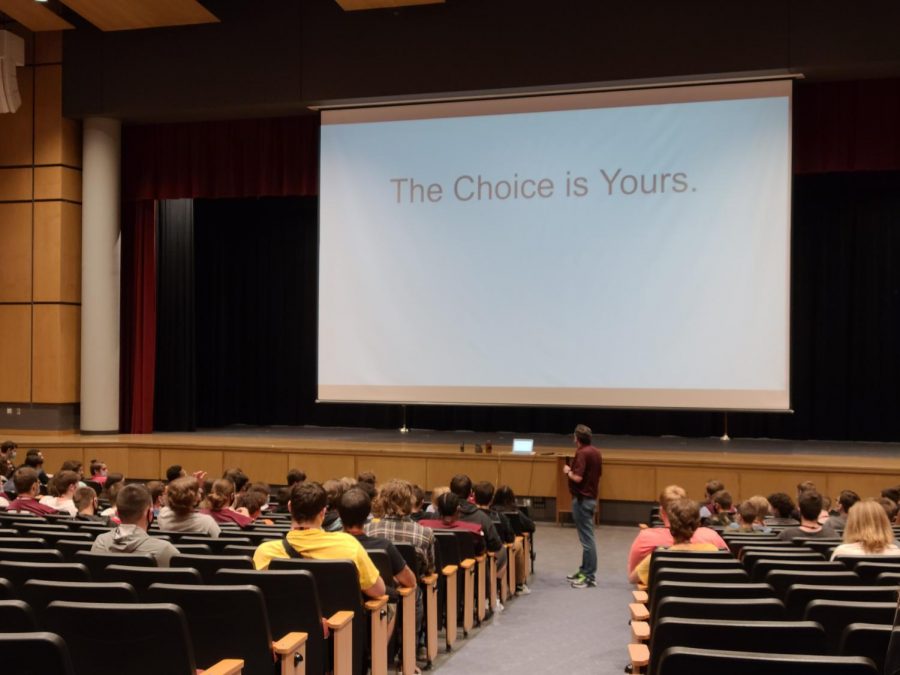 Your choice. Principal Andrew Neely speaks with the senior class male students. He showed them photos of the damage and told them they can make a difference.

Starting a few weeks ago, custodians began to discover messes and damage to the men’s bathrooms. It has gotten progressively worse throughout the weeks, which led Principal Andrew Neely to close all of the men’s bathrooms except for one in each building.

Neely discovered that the cause of this vandalism started with a hashtag on TikTok.

“It’s essentially a challenge where kids try to one up each other by either causing some type of vandalism or stealing something, and they take either a video or a picture of it and post it on TikTok,” Neely said.

This is a nationwide problem. Students damaging bathrooms, stealing school supplies and other random items has created a trend. It is called the “Devious Licks challenge” and according to the Washington Post, multiple students from around the country were arrested for their actions, and an announcement from TikTok stated that they will now remove all videos associated with the trend.

According to People, the trend started at the beginning of September when a TikTok user posted a video of a box of masks they said to have stolen from their school. This user captioned the video: “A month into school… absolutely devious lick. Should’ve brought a mask from home. Now look at you walkin round campus maskless you dirty dog.” The video was removed by TikTok, but still ended up getting over 300,000 views.

Neely feels as if he can’t allow the male students to have the same level of freedom that they used to have.

“It comes down to an issue of manpower. If I can’t trust people to use the bathroom in a way that it is meant to be used, I have to be able to closely monitor them because I can’t give that level of freedom. We want to be able to do what we need to do without restrictions but that freedom comes with a contract. Like the social contract. I expect students to do what they need to do without causing destruction. As long as that is being upheld, I will give as much freedom as I can. But when that’s broken, I need to find a way to fix it and in the meantime, I can’t afford to have thousands of dollars worth of damage being done to the facilities,” Neely said.

Because of this, Neely locked all bathrooms in the school except for two: the bathroom outside of Principal Vincent Nedimyer’s office in the A building, and the Seventh Avenue side of the second floor of the B building. However, Neely has opened more since then. Male students have expressed how irritating the situation is.

“I’m irate that we have to close the restrooms over something so immature for a popularity status,” senior Brenden Grimminger said.

“Honestly it’s quite embarrassing that people are really going in and stealing and breaking things. It’s not funny, it’s not quirky, it’s stupid. When you vandalize something and then post it, that’s enough evidence to get you convicted,” Nedimyer said. “Also it’s pretty sad that they had to close almost all of the bathrooms especially when there is now a picture of a trash can on a toilet in the girls’ bathroom and someone using toilet paper as party streamers in the boys’ bathroom. I thought we were high schoolers and almost adults, not middle school 12-year-olds. It’s pathetic.”

Other students get humor out of it, but only until it crosses a line.

“Personally I feel that the whole trend with the bathrooms is funny to an extent when it’s harmless pranks, but it’s not cool when people actually start destroying the property of school like mirrors and vents,” senior Martino Tornatore said.

On Sept. 17, Neely had class meetings with all of the male students, and showed them pictures of the damage to the bathrooms. According to Neely, every student had a different reaction to these photos, but he still wanted them to know that only they can make a real difference.

“What I need is all these other 1,980 kiddos to tell us what is going on. They don’t have to call them out by name, but we have a lot of things we can do but we need to do something when it is happening. So if you see someone destroying the school whether it’s stealing something or causing vandalism, all it takes is letting the closest adult or principal know,” Neely said.

Although Neely has access to cameras and has teachers monitoring some of the bathrooms, there’s only so much he can do.

“I have a lot of ways I can track things down but the longer it goes the harder it is to figure it all out. I know the whole culture of  ‘not wanting to tell on someone’ or ‘snitch’ is the big word, but we have to police the school all together because there are way more kiddos then there are adults,” Neely said.

Neely also reached out to parents seeking their help with the situation. He sent a letter asking parents to encourage their children to speak up to authority if they see something like this happening. Neely’s encouraging words to parents and students: our school is in need of upstandersnot bystanders.

According to Neely, if he could say anything to the students causing these problems, he would ask them a simple, one word question.

“I would first ask them ‘Why?’ Is it really worth the like or the thumbs up you get on social media to destroy something that everyone is trying to use? That’s essentially what it looks like is just to get a like from someone you don’t even know on social media. I think we need to find something else to do to make you feel good that doesn’t cause destruction,” Neely said.

Neely wants every student to think about what type of environment and school that they want to have.

“I can’t do it alone. I only have certain levels and things that I can do. Do I want to go to the school that’s on social media for things being destroyed, or do I want a school where all of our recognition comes from positive things that we do every day. I personally would rather be recognized for that than a school that has a bunch of kids that can’t utilize a bathroom properly and the principal has to shut things down. I don’t want that and I don’t think anybody wants that,” Neely said.