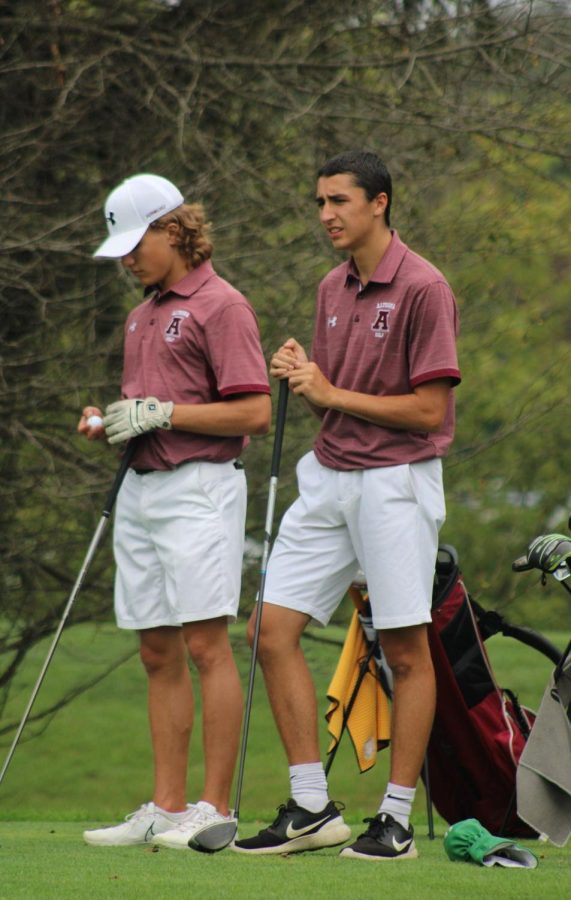 Getting ready for the match Senior Jordan Lestochi stands on the golf course waiting for his turn.

As the fall sports season continues, the student athletes continue to lead their seasons with no more than three losses per team. After coming back to school and returning to a full season, most athletes have been motivated to keep the records high.

Senior Aidan Kelly feels he and his cross country team are now putting more effort into the races than they ever have before. They all have the same goal; leading their team to Districts.

“As a team, we’re putting time and effort into the races,” Kelly said.  “We lost a lot of seniors last year and that affected us. I feel that we’re better as a team now than last year. Working hard and working out a lot more is what helped us throughout this season, we’ve also been focusing on the big picture which is Districts.”

According to Kelly, time records in cross country are important to the game.

“Sixteen minutes and fifty-two seconds is the fastest time we’ve done this season,” Kelly said. “I’m so proud that I’m the one who got that time. There’s been changes here and there, but nothing major has changed. There’s not really been any big changes to the team. Varsity has stayed the same since last year.”

For sophomore Abby Donlan, having control of the court and ball is very important.

“This season is going really well,” Donlan said. “We improved our control towards the ball. When we practice, we practice different ways to control ourselves and the ball. I improved my rallies last year. Being there for each other has been very important throughout the tennis season.”

As her season progresses, Donlan said that fun events have been held on and off the court.

“So far we’ve done a JV tournament, and we’ve gotten everyone that’s new to gather and hangout. It’s fun being on the team when you’re passionate about this sport and know the other people,” Donlan said.

Senior football player Ethan Stroup is proud of how far he and his teammates have come so far this season.

“My season is going well so far,” Stroup said. “We started out hot, and we drizzled out. But we’re looking to come back stronger than we have. We kept working hard, and we kept building up from last year. Everyone is committed to the team. We’ve been practicing hard everyday and working to improve everyday.”

According to Stroup, winning the game against Hollidaysburg opened up a lot of the teammates’ eyes to believe they can do their best, if they put in the effort.

“We beat Hollidaysburg for the first time in three years… We worked hard, and we’re very dedicated and ready to win,” Stroup said.

Junior Tyler Stirk said he is satisfied with how the season is going; especially with their record and team’s communication improvement.

“Our season has been going really well,” Stirk said. We were really good then we had a losing streak, but now we’re doing much better. We’ve gotten closer to some of the players. We as a team have been communicating and bonding more. We used to argue a lot, but now we just talk things out. I’ve been making better decisions on the team.”

Junior Daniel Batrus believes that since the golf team had lost a total of five seniors since last year, it has allowed people on the team to step up and help lead the team.

“We knew a lot of us had to fill in the spots and play better than we have ever played. We have more friendships between each other, and we are more comfortable towards each other,” Batrus said.

The team attended a tournament, and Batrus believes that boosted their confidence.

“This year was the first year we got to a big tournament, there were around 30 schools that went, so it was a really big event. It was also a really good experience. The tournament we went to was Sunnehanna Country Club. This tournament made us more confident in the team and made us realize that we have good potential. We’re moving to get better; we’re very consistent and motivated,” Batrus said.