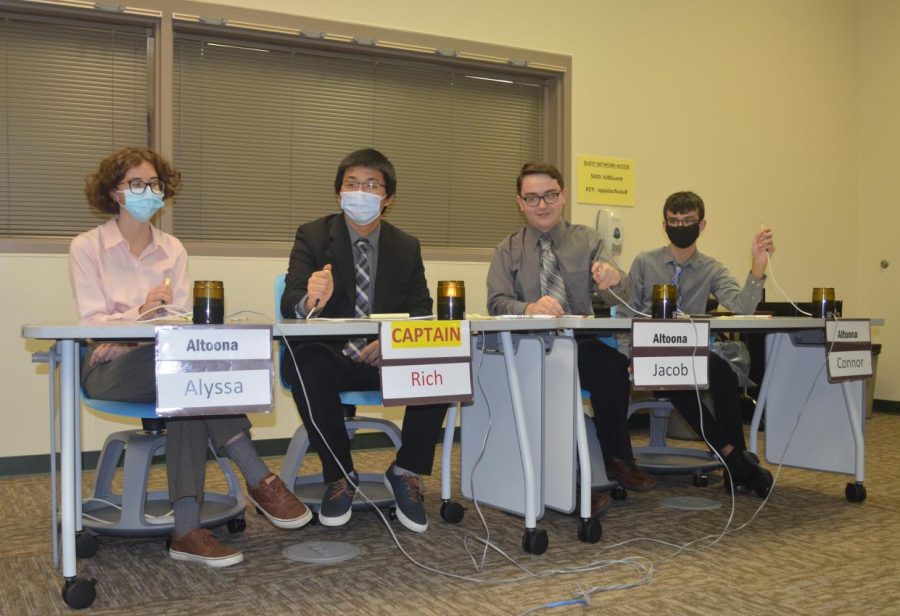 Beating the buzzer left to right Alyssa Clark (11) Rich Wei (12) Jacob Ceglar (10) Connor Matosziuk (10) prepare for District Championship against Hollidaysburg. “We’re ready to compete in regionals, but it never hurts to be more prepared and study all kinds of things,” Ceglar said.

Sophomore Jacob Ceglar answered the winning question about the cell membrane. The Altoona team is now champion of the Blair district and will battle the champion of Cambria district in early Spring.

According to Ceglar, he was ecstatic winning the final question which led to winning districts.

“I’ve worked really hard. I studied, prayed and did a lot of things to get to this point. At the beginning of the year, we practiced and competitions began in late September and carried through the competitions throughout late October, then we had district competitions in early November,” sophomore Jacob Ceglar said.

After winning Districts, they have to compete in regional competitions. If they win against the winner of Cambria Districts they will be attending the state competition.

“I think dedication to school work and reading, learning outside of school or learning from online really helps. We’ve also watched pop-culture tv shows and other sites to help us learn about many, many different things. We’re ready to compete in regionals, but it never hurts to be more prepared and study all kinds of things,” Ceglar said.

Preparing for regionals, the students attend Jen Lowe’s classroom every Tuesday for an hour.

“We usually meet every week to refresh and learn more about trivia. I think that the team’s majors strengths are art, literature, geography, history and science. Our weaknesses are definitely poetry, sports, astronomy and certain types of literature,” Ceglar said.

Junior Alyssa Clark competed alongside her teammates at the Districts. She has strengths she feels applies to the team well.

“My best strengths are art and literature, and that’s something most of us struggle with. It helps a lot since those are my best strengths. I like getting a chance to learn more things about trivia and in general. Getting out of school is also something I benefit from being on the team,” Clark said.

Jen Lowe, the scholastic scrimmage adviser, is very proud of her students for their commitment to the team and their win in Districts.

“The team did an outstanding job preparing for their competitions this year. They also have wonderful dedication coming to practices every week, and I’m proud of their commitment for becoming District champions. We have a lot of time to prepare for regionals and that’s definitely something that’s a bonus. We have a chance to strengthen our weaknesses in science, artists and literature since there’s so much to learn from,” Lowe said.

Lowe helps the team improve their knowledge and helps when needed.

“I can’t take much credit for the team’s successes. I just guide them and help them with their weaknesses, but they have to do all the work depending on their knowledge in certain subjects. We didn’t lose our focus, and we came back to win the District championship. We had been undefeated up to the championship game, but we persevered nicely,” Lowe said.

Lowe stated that it’s been about four years since they had made it to Regionals.

“Our rival, Hollidaysburg, has defeated us for the past few years, but we finally came out on top. We continue to practice the rest of the school year for the other following years. We also try to compete against other schools to help strengthen our weaknesses,” Lowe said.