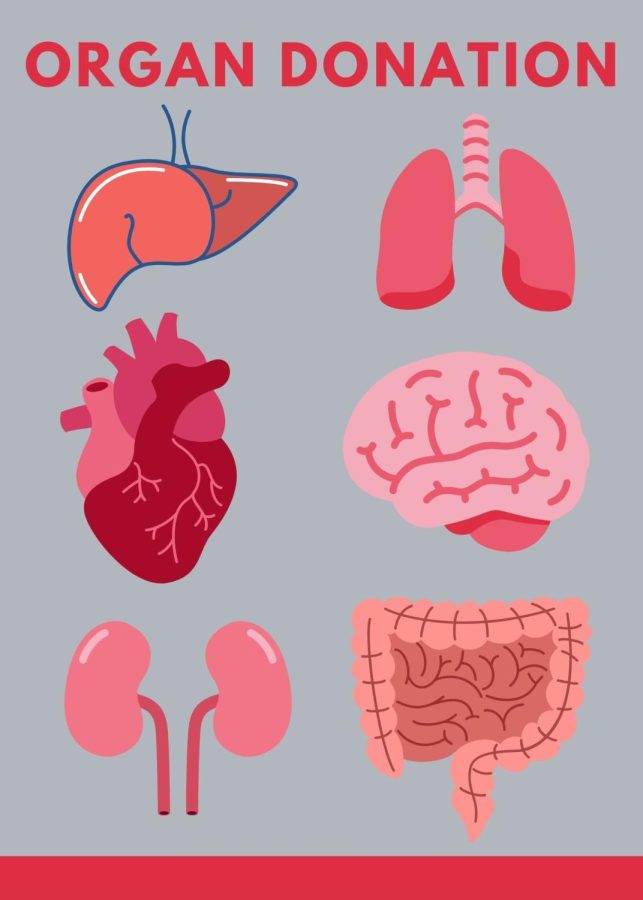 Being a donor is important. One person can save eight lives.

According to Penn Medicine, 95% of U.S. adults support organ donation, but only 54% are actually registered. In Pennsylvania, only 48% of people are registered. As an organ donor, a person can save up to eight lives and improve 75 more.

According to the Health Resources and Services Administration (HRSA), several organs can be donated such as: kidneys, liver, lungs, heart, pancreas, intestines, hands and face. Other parts of the body can be used to better the lives of people such as: corneas, the middle ear, skin, heart valves, bone, veins, cartilage, tendons and ligaments. Other common transplants include bone marrow and stem cells.

A common misconception is that a person has to be dead to donate. Many organs can be given through live donation. These would include one kidney, one lung, part of the liver, part of the pancreas, or part of the intestine. A living donor is typically someone who is related or emotionally connected to the recipient.

There are two types of living donation. The first is direct donation when the donor can specifically name the person receiving. A non direct donation is when a person doesn’t know the person who will get the organ, they are just paired with them.

According to the National Kidney Foundation, a typical living donor is 18 years or older. A person also must have normal function of the organ they are donating. “There are some medical conditions that could prevent you from being a living donor. These include having uncontrolled high blood pressure, diabetes, cancer, HIV, hepatitis, or acute infections.”

Many argue that they can’t register because it goes against their religion, which in fact isn’t true. According to the NewYork-Presbyterian, most major religions believe that organ donation is the greatest deed of humanitarianism.

There are many other myths that reject the selfless act of organ donation.  An example of a myth is that if a person registers, the hospital won’t work as hard to save their life. In fact, doctors only focus on saving a patient’s life. The Mayo Clinic rebutts many myths about organ donation.

According to the HRSA, there are 106,668 people on the transplant waiting list and a person gets added every nine minutes. 17 people die each day while awaiting a life-saving transplant.

One of the best feelings of being an organ donor is knowing lives will be saved.