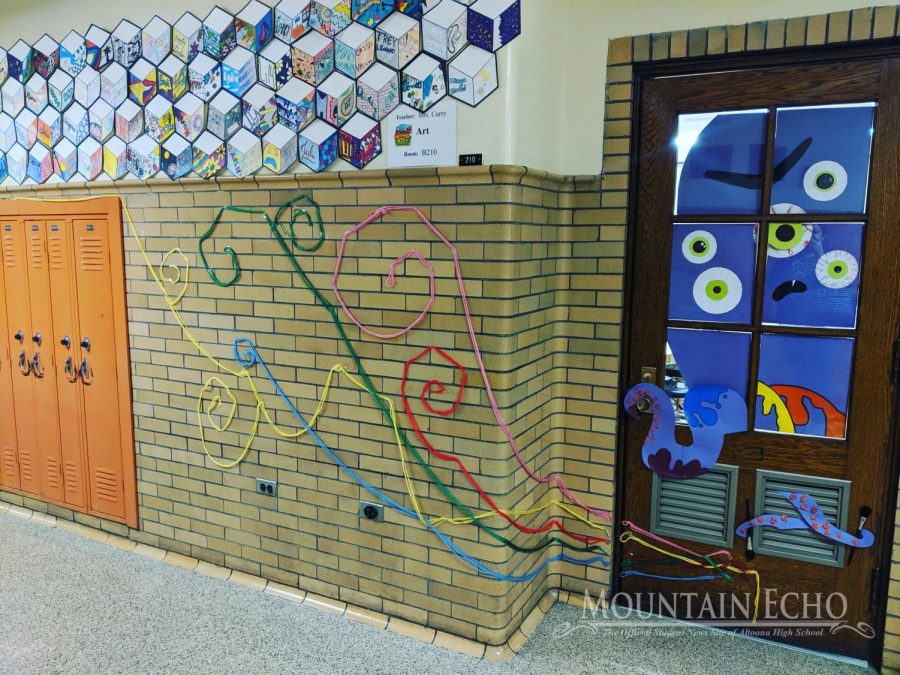 Arts and Crafts! Art teacher Kathryn Curry and her Art in public places class wins the door decorating contest sponsored by the Maniacs group at the high school. The class won a pizza party reward for their victory on showing their art abilities through the creation of the theme.

Annually, the Maniacs sponsor a Halloween door decorating contest which finished up recently.

The theme for this year’s Art In Public Places door was an octopus theme. On the door, was a large purple octopus with many eyes including tentacles coming out of the vents at the bottom while holding paintbrushes. Around the octopus, there were different colored paint splatters.

The contest was open to any reporting room or a class. Guidance, attendance and principal offices were also encouraged to participate in this year’s contest. The Maniacs judged and voted from Oct. 23 through Oct. 24.

The past two doors to beat were previous winners such as art teacher Eric Hoover and special education teacher Adam Mathias.

Curry’s same Art In Public Places class participated last year in decorating the door. Last year’s theme that won the most votes was a type of vending machine that incorporated artsy supplies that were for sale.  Every student in the class was given the task to draw their own sketch and then voted on which one they wanted to use.

Senior Rachel Hord came up with the theme for this year’s door.

“I thought that my design looked like Monsters Inc. and thought it would be cool,” Hord said.

Students were excited to win.

“I am very happy about winning because I have never been a part of a class that has won the door contest before. I am also proud of the class for voting on a concept that had actually won,” senior Gabrielle Genua said.

Each student was given an assignment on what needed to be done to the door.

“Everyone in the class had an assignment for the door. My assignment was to cut out the purple pieces for the octopus and put on the yarn for the tentacles,” Genua said.

Other students in the class made eyeballs, put paint splatters on the octopus and added yarn on the outside of the classroom.

Throughout the contest, Curry’s class had one main competitor.

“We were in competition with the other art teacher [Eric] Hoover, and it was fun beating him this year,” Curry said.

Curry believes the competition between her class and Hoover’s class was all in good fun.