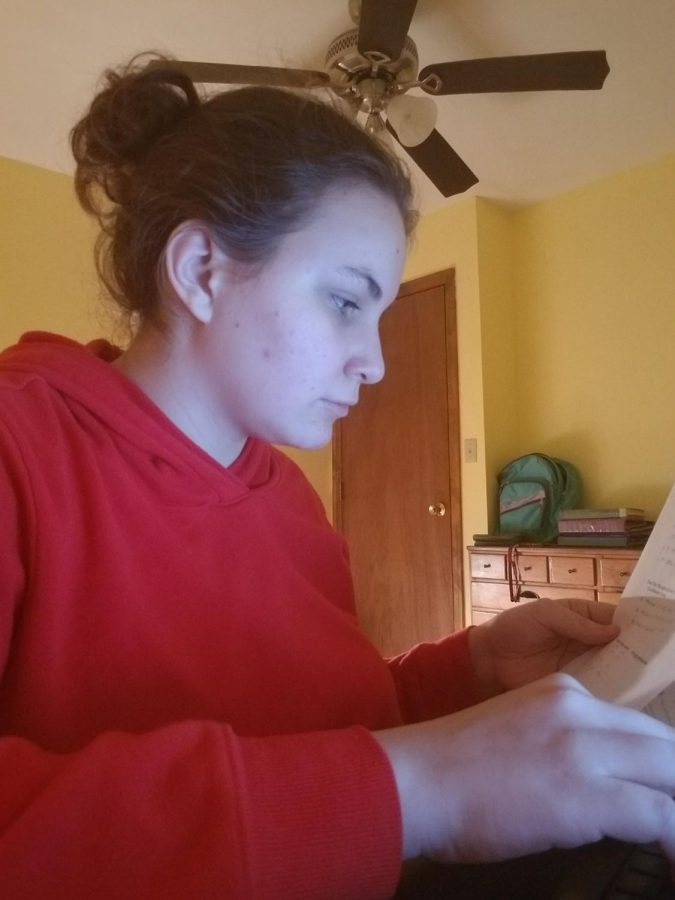 Junior Sonia Yost completes her AP Statistics homework. This year, Yost will be taking the AP Statistics exam. "I find it incredibly difficult to focus when I'm at my house because I focus better in a classroom, so I'm not thrilled about the online tests," Yost said.

Just like many other things, this year’s Advanced Placement (AP) exams will be modified due to the coronavirus. The exams will take place from May 11 to May 22, with each subjects’ exam being given on the same day at the same time, worldwide.

In previous years, the exams were generally between two to three hours, with most closer to three. Each AP subject had its own tests, but most tests followed the same format. The test consisted of several parts, including a multiple-choice section, free-response question (FRQ) and possibly a long essay question. This year, the test was cut down to be 45 minutes long, will only include an FRQ, and be taken from home. Students can take the exams on any device they have access to. However, one of the most major changes is that the test is now open-note.

“At first I didn’t love the idea of the modifications. It seemed sketchy because I felt that it put me at a disadvantage to kids who were willing to cheat. However, since finding out that the test is open-note, I’ve become more OK with how the exams have changed,” junior Alex Thaler said.

Some students had hoped the exams would have been canceled, but others felt that it would take away students’ chances to earn college credits.

“I think if they had canceled the exams, a lot of people would have been upset. People paid money and had spent a lot of time preparing, not to mention that they can’t get any college credits for their efforts,” senior Lam Vo said.

“Given the College Board’s eternal stringency, I think they will have no problems in creating an exam and testing procedure that is equitable to all test takers,” junior Aiden Phillips said.

As usual, the exams will be graded on a scale of 1-5. Although the College Board is confident that the majority of schools will award credit as they have done in the past, students worry that colleges will not value their scores from this year as much as they will from previous years.

“I know colleges have said they’ll still accept the scores as they have before, but I think that given how easy it is for students to cheat, the scores might be invalidated in a way. But I hope that colleges will be lenient given the unusual circumstances,” Vo said.

With the test only being 45 minutes long, it is important that students study and organize their materials prior to the exam so as to not waste time searching for information.

“I’m using the resources given to me by my teachers. These include videos, live sessions and practice tests. I’m confident that I’ll do well on the test, but I’m finding that it is harder to learn because in the classroom I’m more motivated,” Vo said.