Netflix film, The Half of It, isn’t as great as everyone says 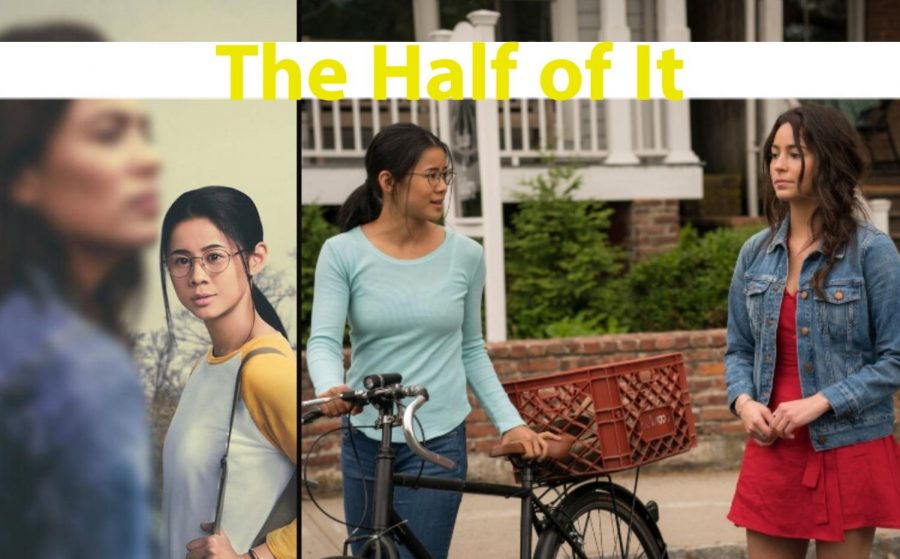 The Half of It, an original Netflix film, is directed and written by Alice Wu. Wu's first feature film was Saving Face in 2004 which similarly followed the life of a lesbian Asian-American growing up in a traditional household. Made with Adobe Spark.

The Netflix movie, The Half of It, came out on the streaming service on May 1 of this year. The film follows the character of Ellie Chu, a nerdy high schooler who makes money by writing essays for her classmates. Paul Munsky, a football jock, asks for Ellie’s help to write a love letter to his crush Aster Flores, a beautiful popular girl. Ellie ends up helping Paul, and the two become friends, but soon Ellie discovers she herself is falling in love with Aster.

The characters within this movie, including the more minor ones, were all genuinely likable. The main cast played both the humorous and the dramatic components of the film well. The first half was well-written and solidly directed, with nicely established shots throughout. One thing the film nearly perfects is the friendship between Paul and Ellie. The chemistry between the two actors is undeniable on screen. It’s rare to see a male and female friendship portrayed so authentically and without romantic or sexual tension between the two–well, at least in the film’s beginning.

About half way through the movie, the film becomes something else, and not in a good way. Out of nowhere, Paul suddenly kisses Ellie, which sets up the reveal that Ellie is in love with Aster. In anger at this revelation, Paul tells Ellie that she’s “going to hell”–the first time her sexuality is directly addressed (unfortunately, within an attack). But soon after, the two are talking again as if nothing happened, with no mention of the awkward moment shared–and it becomes apparent that the kiss was scripted to dramatically move the plot. While the kiss doesn’t affect their friendship, it does affect the film’s dynamic, confusing it. The rareness of a portrayal of genuine friendship between a teenage girl and boy is ruined by the kiss, made all the sadder with its injection as a plot device.

After this, the story begins to drag. One late moment in particular, the much talked-about “Love is  . . .” scene at the church ceremony, Ellie stands up and tries to describe what love is. During the scene, Ellie espouses, “love is messy and horrible and selfish…and bold.” It’s difficult not to cringe when she says these lines, especially when they’re supposed to be philosophical. Ellie’s words just sound like any other teenager rambling on about love, yet many critics and viewers are impressed with these “deep” lines (now found on t-shirts available on online). The moment attempts to be profound but fails, making the scene feel overly cliche (even for a high school film).

Despite the buzz surrounding the “Love is . . .” scene, the movie is not really a romance story. Ellie and Aster barely have screen time together, as most of the movie revolves around the friendship between Ellie and Paul. Even when Ellie and Aster do share a scene together, there is zero chemistry between the two. When Aster tries to joke with Ellie, Ellie becomes defensive, looks annoyed and appears that she would rather be talking to anyone else other than Aster. What kind of love is that? Even the thread of a relationship between the two seems forced, which is the opposite of what any romantic movie should portray.

For a movie that is lauded for the portrayal of a teenage lesbian romance, the pairing of Ellie and Aster itself isn’t satisfying. Chemistry and magnetism need to be evident between two love interests in order to convince the audience that both Ellie and Aster are “meant to be” (whether or not they get together in the end). Putting a lesbian Asian-American woman as a lead in a high school movie has a positive impact, whether the film is good or not. This movie and its popularity will undoubtedly open more doors for filmmakers to write movies with diverse leads; hopefully, future movies with the same significance will have a more convincing love story.