This World We Live In sheds light on different universe 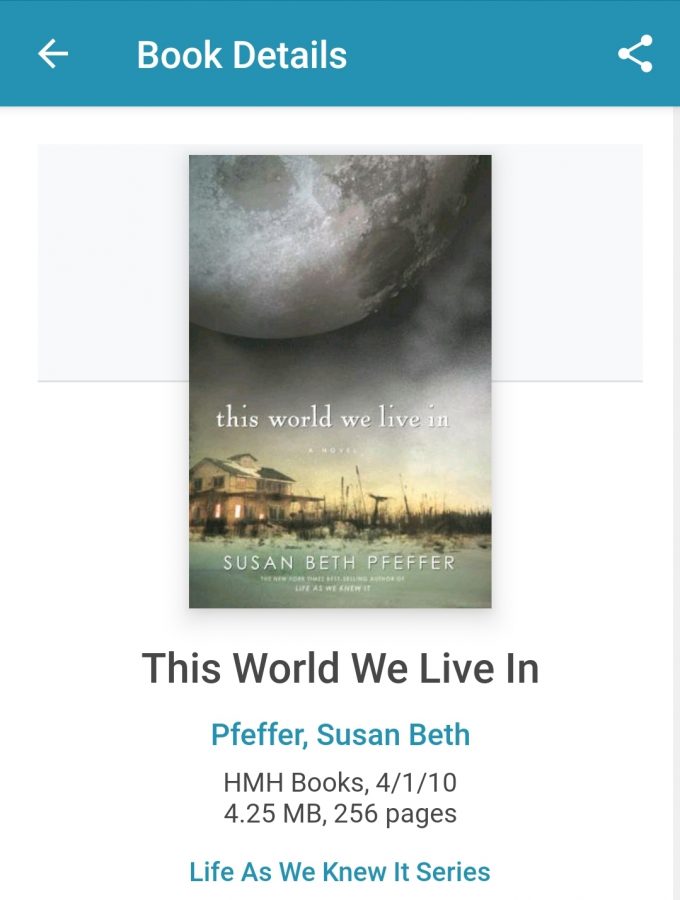 "This World We Live In" is available on Cloud Library. A library card is needed to sign in.

“This World We Live In,” written by Susan B. Pfeffer, is the third book in a series called “Life As We Knew It.”

This book was very interesting to read. The story is written through the main character, Miranda’s, diaries. She lives with her mom, older brother, Matt and younger brother, Jon. The biggest conflict in this story is that a year before when the story takes place, a meteor hit the moon, which catastrophically altered the earth’s climate. Her friends and neighbors have all died, the land is frozen, and food is getting harder and harder to get.

Matt and Jon go fishing at the river, and luckily bring back a lot of fish. At the river, Matt met his girlfriend, Syl, who he eventually marries. Not only do they have the shad now, but every Monday, Mr. Dartworth [another character in the story] brings them food for the week.

Another way they seem to get by is by going into abandoned houses in their town and taking items they could use, like toilet paper, soap, books, etc. This in particular, is Miranda’s favorite thing to do.

Miranda and her mom fight quite a bit. During one of their bad fights, Miranda goes on her bike outside and just rides away. When she got a little lost, she rode past a mound of bodies on a roadside by a field. She couldn’t think of anything else after seeing this. It basically scarred her.

They later come up with an idea to pose as one of the neighbors kids. This will get them weekly food from Mr. Dartworth.

Alex is very determined to get Julie to a Convent, then for him to become a Monk, and he is the only person that wants that. Jon and Julie grew very close throughout their time together, and Miranda and Alex fall in love. Even though they fell in love, Alex is still determined to leave.

Miranda later finds out that Alex has passes to a safe town, which are very hard to get. They come up with a plan for them to get married, and to take other people with them.

A tornado then hits Howell, and Miranda is forced to make a decision that will change their lives.

Know that this book is part of a series. Unfortunately, when I picked out this book, I didn’t realize that there were two books before it. Luckily, it didn’t necessarily give anything away because each book is told by someone different. This author was very creative. I couldn’t imagine if that happened to the world we live in. I would recommend this book if you like books that keep you at the edge of your seat.