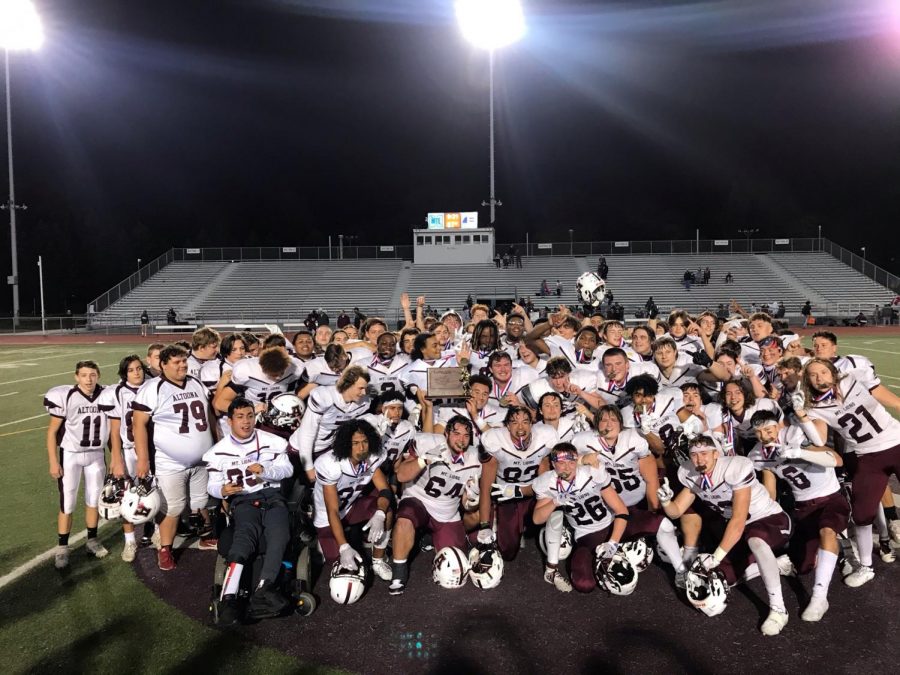 We did it! The football team poses for a picture with the D6 championship trophy. This was the first time in 18 years that the Mt. Lions were able to win the D6 game.

On Oct. 23, the Mt. Lions played local rival State College in the D6 championship. The Mt. Lions won with a score of 22-21. The team was able to win this game for the first time in 18 years.

“This is a huge accomplishment for the team considering it hasn’t happened in so long,” offensive coordinator Brian Camberg said.

The Mt. Lions lost last year to State College with a score of 48-0.

“Last year was really difficult for us. We ended the year with a record of 1-9, and we lost pretty badly to state college,” senior Matt Bowser said.

“It feels really good to be able to say we beat State College considering the score from last year,” senior Ray Boose said.

The Mt. Lions have been preparing for the season since early June.

“Throughout the pre-season, we were uncertain with how many games would have, if any at all,” Bowser said.

Throughout the game, both teams kept intensity resulting in a close game. With the game being tied, the team opted for a two-point conversion rather than a field goal.

“Whenever I scored the game winning two point conversion, I was very excited in the moment, but I knew we still needed to get a stop on defense,” senior Kyle Pheasant said.

“My decision was based on two parts.  One, let’s see how they line up to our formation.  If they line up favorably, we’ll go for it.  Two, we had a lot of success running that play during the game; I was very confident in our players to have continued success,” Camberg said.

After their score, State College gained position of the ball with time left to score.

“There was still plenty of time on the clock for State College to score, but our defense did a great job and Jake Adams had a great interception to finish the game,” Pheasant said.