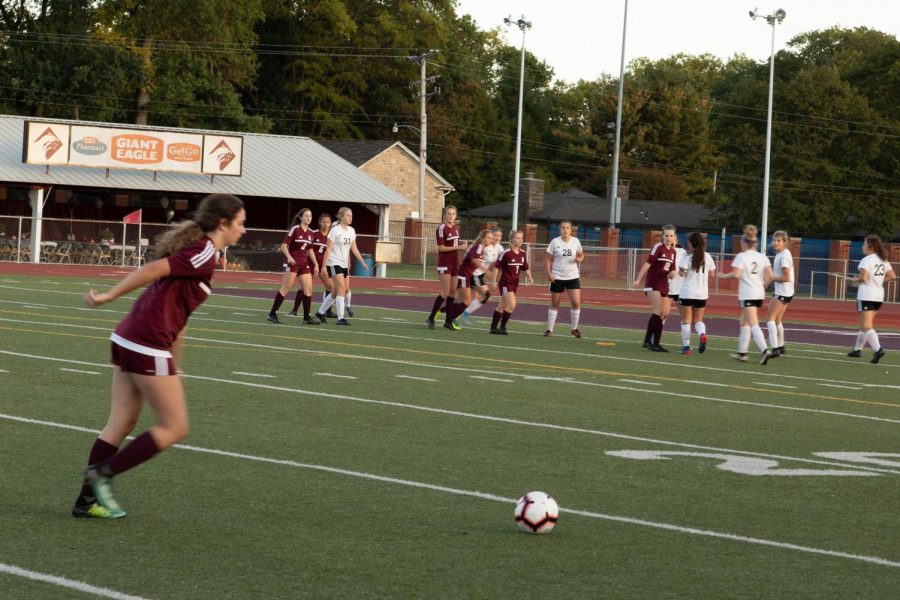 Altoona plays against the other team with the upper hand. The girls remained undefeated this season.

The girls’ soccer team came out with 10 wins and one loss throughout the season. This season was the first season that the team has gone undefeated during the regular season. It was also the second year in a row that they have won a district title and had the opportunity to advance to the PIAA State Tournament.

“I was very proud of our team’s success this year, especially given the difficult circumstances arising from the pandemic. I feel like this year has been the best that the team has been during my four years,” senior Sarah Graham said.

The girls were awarded their medals on Oct. 10 during the boys district game at Saint Francis.

“I wish that the result of the final game would have been different and that our season was not yet complete. Still, I am very proud of our team and the hard work that we have put in to get us to the point where we are now. Mostly, I will just miss seeing all of my teammates every day since we are all good friends. To the players’ that will play again next year work hard, enjoy themselves and to appreciate each day,” Graham said.

Since the season is over, a lot of other players that are returning to the team next season are already looking forward to playing again.

“I feel that our team has had a lot of success throughout the season. As a team, they came up with goals that they wanted to accomplish throughout the year. All of the regular season goals were accomplished due to the hard work and effort the team put in,” Coach Ralph Winterburn said.

The teams’ successes together has led them to win a lot of games and made some soccer highlights for the school.

“The captains are not only looked to as vocal leaders on the field, but also role models for the younger players off the field as well. I rely on my captains to help lead the team and provide examples for newer players in the program of how to become a successful student athlete,” Winterburn said.

“I think the one thing that stands out to me about the season is the way our schedule changed on what seemed to be a daily basis. The team did a really good job and not getting frustrated with all the changes and accepted that this season would be different and we needed to embrace the change,” Winterburn said.

The girls played a total of eleven games throughout their season this year because of COVID-19. The schedule changes did not affect the skills of the players.

“To the players that are coming back next year, I would remind them of the work that needs to be put in in order to keep our program successful. Even though we are not together as a team everyday, everyone has the responsibility to continue improving for the team next year. The girls put in a tremendous amount of energy and effort in order to make this season successful. The team should be proud of its accomplishments,” Winterburn said.