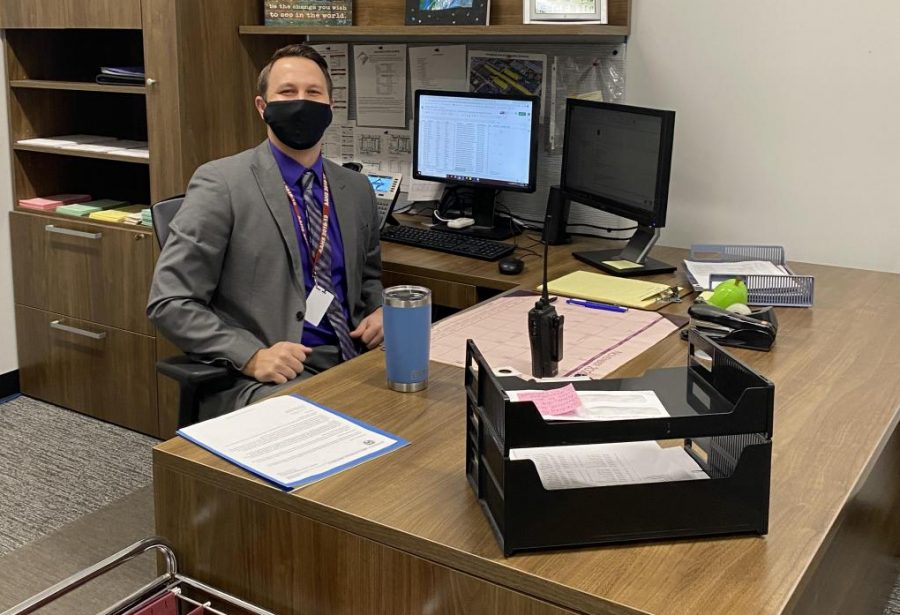 Cheese! Shane Cowher smiles for his picture at his office in the A building after his interview. Cowher accepted a position at as Tyrone Middle School principal and will be leaving Altoona.

Assistant principal Shane Cowher has made the decision to accept a position as principal at Tyrone Middle School. He will be leaving Altoona High School as soon as a replacement is found.

“Tyrone is my hometown, I was born, raised and I live there, so when the opportunity came it was hard to pass up. This position gives me to the opportunity to move to be a head principal instead of an assistant principal,” Cowher said.

“I’m really going to miss having daily conversations with my fellow colleagues and just being around everyone. I’m going to miss all of you, this was not an easy decision for me. I have so many friends here, and it’s going to be really hard to learn all the new procedures and personalities at my new position. It was an opportunity that I didn’t want to pass up,” Cowher said.

Cowher has been an assistant principal at Altoona for four years now.

“My favorite memory of being a principal here was the turkey fundraiser we did a few years ago where there were giant cardboard cutouts of our faces, and Mr. Bufalini had to dress up in a pilgrim costume,” Cowher said.

Jason McGinnis is a fellow assistant principal to Cowher.

“Mr. Cowher brought to the table his energy and passion and his love for kids on the daily basis. I always knew I could rely on him for advice, and he was someone who I felt very comfortable working with. I’m going to miss the professional and personal relationships I’ve had with him the past five years. I hope he is able to establish himself in the community in Tyrone, and I hope they embrace him for not only the leader that he is but more of the person and man that he represents. Mr. Cowher brings a great moral and ethical charter, I hope that is seen portrayed and embraced in the new community on a daily basis,” McGinnis said.