The 57 Bus shows all sides of a crime 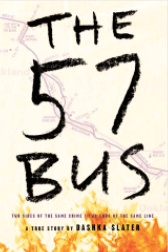 Sasha and Richard attend different schools, and only cross each other’s paths during their ride home. Sasha was sitting in the back of the bus, wearing a t-shirt, a black jacket and a white skirt. They identify as agender, and wear a skirt because they feel more comfortable in it.

Sasha was sleeping in the back while Richard and his cousin Lloyd flirted with different girls. In a split second, Richard flicks a lighter and touches it to the hem of Sasha’s skirt. She is engulfed in flames and spends weeks in a hospital undergoing surgeries to treat her burns.

Richard is arrested the next day, being charged as an adult and facing life in prison.

The author teaches the audience about the different terms for gender, sexuality and romance. I wasn’t very educated on this topic before, so I’m glad the author included them.

It is also very interesting to me how Richard seems to want to do something good with his life. He confided in Kaprice Wilson, Oakland High School’s attendance compliance officer. If he got in trouble, she helped him through it. It really seemed to me that he wanted to have a good future.

I recommend this book to anyone who likes true crime or nonfiction stories. I don’t typically read nonfiction, but I like true crime so I gave it a try. It is definitely one of my favorites.