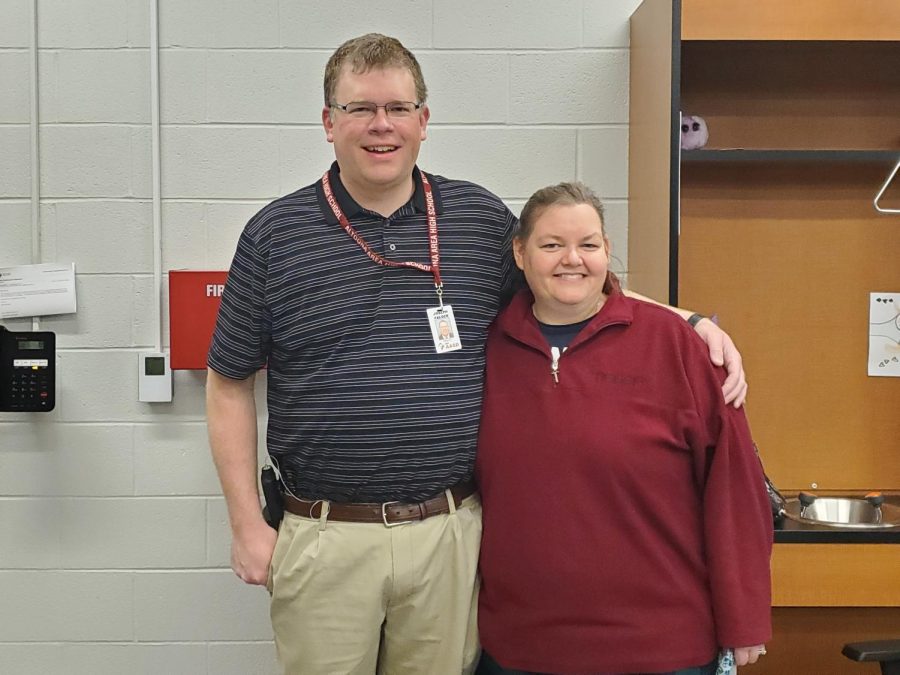 Neither of the Falgers have wanted to do anything except teaching.

“This is what I wanted to do since second grade,” C. Falger said.

“Since ninth grade, I’ve always known I wanted to be a math teacher,” J. Falger

The Falgers met while working another job at a craft store.

“We worked at a craft store, called Ben Franklin Crafts, and we both worked there at the same time. I was already a teacher when we started dating [and] he was learning how to be a teacher, but I was already through the program and had a job. I just worked at the craft store part-time. I didn’t know who he was, my boss told me that someone named Thad was coming in for an interview, and he came in and he wasn’t Thad, so I yelled at him because he wasn’t who he was supposed to be, according to my boss,” C. Falger said.

The Falgers spend their summer off with their daughter.

“We can spend a lot of time together, and we don’t have to plan time off. We can plan any activities with our daughter,” C. Falger said.

“We get to spend a lot of time with our daughter, and we can divide it up. Sometimes we do things together; sometimes we break off and do things separately. It just depends on what we have planned for that day or week. That’s the great part about it, it’s just the flexibility of never really having to be concerned about what’s happening on a specific day, other than the stuff we have planned,” J. Falger said.

The Falgers find that it isn’t easy being with each other all the time. However, things have changed a bit because of the new B building.

“It takes a lot of patience. Now, it’s not so bad now that he’s in the other building, but he used to be legit right there, so I could hear him teaching, so it’s like I was legitimately spending all of my time with him,” C. Falger said.

“We don’t get any separation, because we ride to school together. She’s originally from Cresson; I’m originally from Altoona. But we live in Cresson so we’re not going to bring two cars down unless we have a reason to. So we’re in the car together to go to work, then we’re at work and we’re together, then we’re in the car on the way home, then we go home and we’re together. But now, with me being in the new building and her being over here [in the A building], I only see her in the morning and after school,” J. Falger said.

The Falgers express their frustration about being seen by their students in public.

“We can’t make the assumption that everybody knows that we’re a couple in the same school teaching. The reality is that not every student really knows that so sometimes we’re out together somewhere and a student for Mrs. Falger will come up and say hello to her and not acknowledge me at all or visa-versa. A lot of them will acknowledge both of us but some don’t know we’re a couple,” J. Falger said.

Before J. Falger was moved to the new building, C. Falger enjoyed bothering him while he was teaching.

“I guess I really enjoyed bothering him while he was teaching, when he was over here. I would walk in all the time and interrupt him, and the kids would love it. And that’s the point, to make it funny. I think that’s what I enjoyed most, just being a pain in his ‘you-know-what,’” C. Falger said.