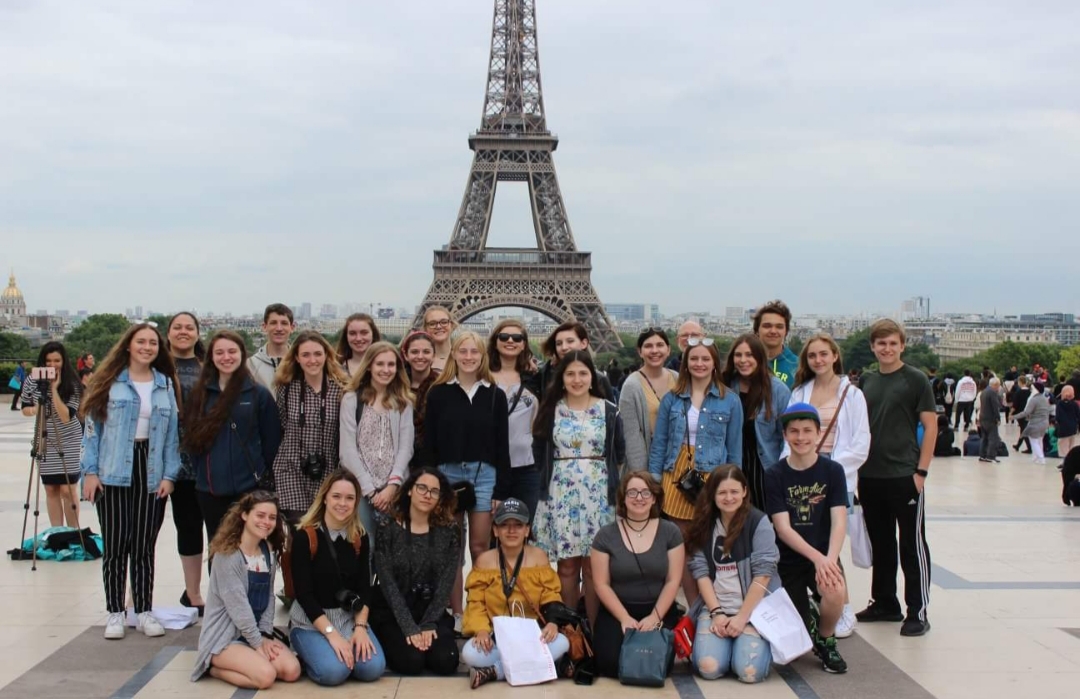 Learning a new language doesn’t only involve learning words and grammar pertaining to that language; it also includes learning about that culture that use that language.

Last summer, a group of 25 students who took French had the opportunity to travel to France for 10 days. The trip started long before they actually boarded the plane with fundraising for the trip starting in the 2016-2017 school year.

“We sold candles and hoagies and one year we did a car wash. There was a lot of fundraising that went into the trip,” said junior Anthony Pater.

On Monday, June, 11 the students boarded a bus that took them from the school to the Pittsburgh Airport. The students then boarded a plane they would be sitting on for the next 11 hours. The plane took them to Paris.

Days one through four were spent in Paris where students saw the Cathédrale Notre-Dame de Paris, the Musée du Louvre, Place de la Concorde, the Arc de Triomphe and of course the Eiffel tower. During one of the days, the group was meant to go to the Catacombs but they were closed because the French were on strike. This came as a disappointment to many of the students and chaperones.

“I was disappointed we couldn’t go because I really wanted to go there and have the students see it,” trip organizer and French teacher Veronica Skomra said.

During the first night of their stay in Paris, one of the water pipes one of the student’s rooms broke.

“We were awake from 3 to 6:30 A.M. trying to figure out what to do with students. It was early in the morning, the hotel was booked and students needed to sleep. We ended up having them drag the mattresses from the flooded room and put them in the other rooms. I ended up giving my bed to three students and I slept on the floor,” Skomra said.

On day five, the students, left Paris to go to Avignon.  Throughout the trip, the students and chaperones formed bonds, and it was here the chaperone Señor David Poole and student Alyssa Lansberry made a special memory.

“When I was in high school, I took French 1 my senior year. In class, we learned a child’s song called “Sur le Pont D’Avignon.” Translated, it means “On the Bridge of Avignon.” While we were traveling on the train from Paris to Avignon, I was singing that song to Alyssa because she was seated across from me. When we got there, we toured Papal Castle, which was connected to the bridge. Somewhere along the line that afternoon, Alyssa saw the shirt with the words and music of the song and bought it for me,” Poole said.

The group was on the move again as they went to Nice. Along the way, the group stopped in Cannes. There the students walked around the Croisette de Cannes and explored the walled city of Saint-Paul-de-Vence.
The next day, the students took a train to the Principality of Monaco, which is known as the location of the Grand Prix.

“I really liked visiting the south just because I had never been there, and it was neat to see,” Skomra said.

All of day nine was spent in Nice, and many students went to the beach or went cliff jumping because it was nearby.

“Cliff jumping and going to the beach were both probably my favorite parts of the trip because I got to hang out with the friends I had made on the trip,” junior Brett Thaler said.

On the last day, after eating breakfast, the students went to the airport, said au revoir to the country and boarded a flight back to Pittsburgh.

“Honestly, the flight going back was really relaxing because on the way there we knew that the moment we arrived it would be non stop moving for the next 10 days. On the way back, we were able to sit back and relax,” Skomra said.