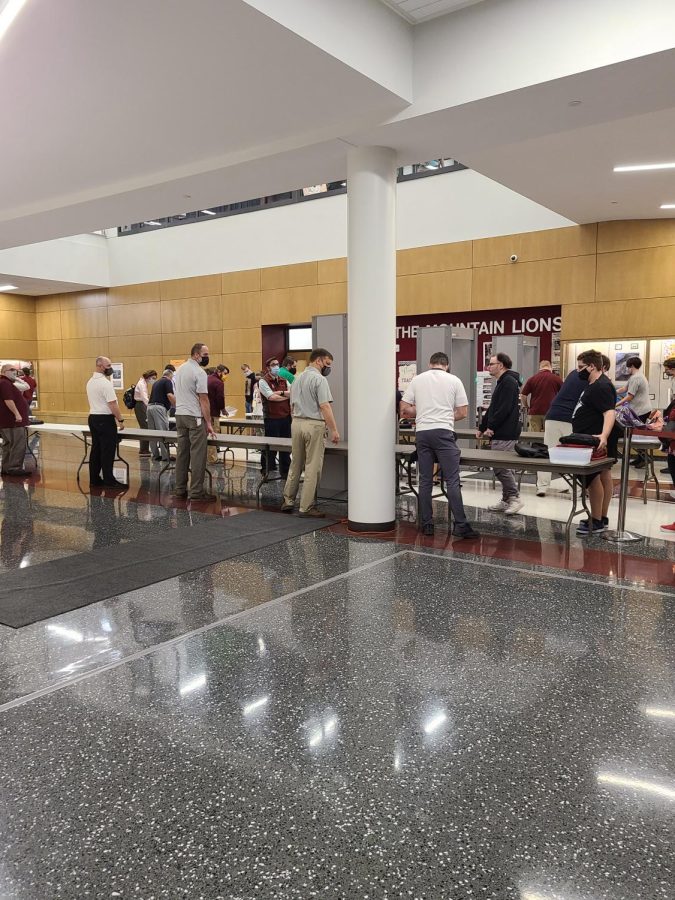 Lining up Students line up on Oct. 12 in the backpack line to be searched. This line was specifically designated for students with backpacks.

This past summer, the school board announced that it would be mandatory to carry only clear backpacks and sports bags to school for safety reasons.

Although they do want us to be safe, students carrying clear backpacks isn’t the way to stop violence and threats to the school. While some feel that clear backpacks aren’t inconvenient, students feel that it is an invasion of privacy and that there is no point in having them in the first place.

There are also privacy concerns with clear backpacks. Many females in the school are embarrassed enough of having to carry around their feminine products during searches, especially now that they are seen right through the backpacks.

The clear bag issue is especially hard for athletes. Most bags that athletes would normally carry aren’t made clear. Not to mention they also probably already have bags from years past that they normally carry, and a lot of people don’t want to have to spend the extra money on something they will only use for the season. Student athletes who do different sports in fall and spring might also need different bags for each sport. For some seniors, this will likely be their last year playing this sport, so it is unnecessary to buy a bag or multiple bags for a few months out of the school year. A lot of companies also don’t make specific sports bags clear, for example it is impossible to find clear bags for baseball and softball.

On Amazon, clear backpacks range anywhere from $10 to $60 depending on the size and brand that students want. Most cheap backpacks are small, and can’t fit all of the necessary school supplies that students need. If students want to have a backpack big enough for their supplies, they will have to spend more money which some students can’t afford. On top of most backpacks being expensive, they aren’t good quality. Many students have reported of their backpacks being too flimsy and breaking a lot. In order to replace these backpacks, students will have to keep buying new ones which isn’t fair to most students who can’t afford them, and will end up having to carry their belongings to school every day.

In the end, if staff wants the school to be safe, clear backpacks shouldn’t be the only safety procedure. There should be more ways to have clearance and safety for students being in school.