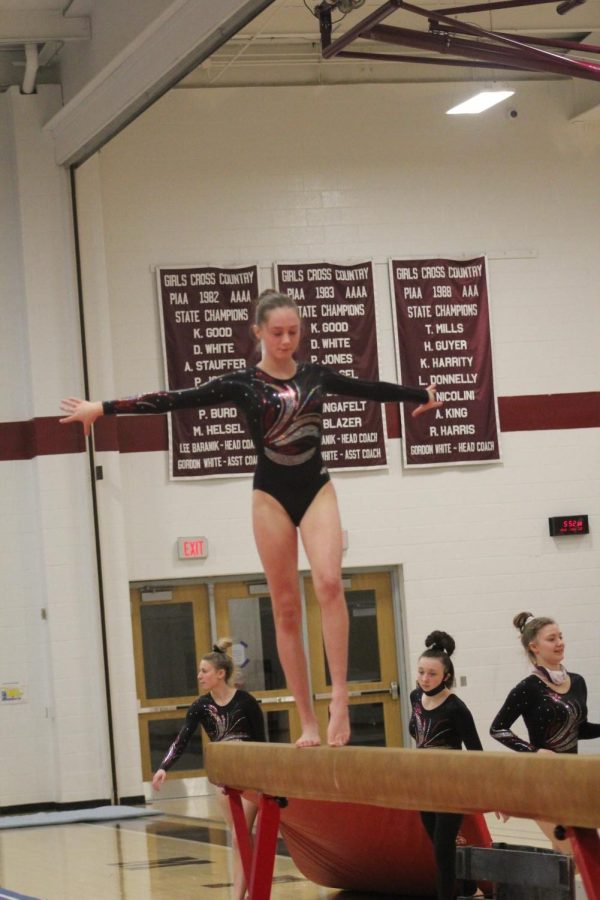 Balancing on the beam sophomore Sofia Fanelli carries out her routine on the beam. “I’m excited to see how the season will go since year and I’m looking forward to making it to states,” Fanelli said.

As the gymnastics season continues, the girls’ gymnastics team has remained undefeated.

Sophomore Sofia Fanelli has been unable to compete for her team for a month and a half and is preparing to get back on the mats.

“I’m very excited to compete since I haven’t competed for a month and a half, and I was very upset when the meet got canceled. I was doing the dismount off the bars, and I landed weirdly. I pulled muscles and the tendons in my back and knocked things out of place. I’m very excited and very nervous since it will be my first meet in a while,” Fanelli said.

While gymnasts compete in different areas, Fanelli does vault, bars, beam and floors.

“Bars would be the best thing I can perform as a gymnast; I love doing bars so much. It’s one of the things I’ve been talented in. I’m very proud of our team for having consistent wins, and I’m also sad since I haven’t been able to compete this season. I’m excited to see how the rest of the season plays out,” Fanelli said.

Looking forward to States, sophomore Delaney Barr feels confident that the team will advance to that level once the season comes to an end.

“I’m certain that we will get to States as we stay undefeated as a team altogether. Once we get to States, Moon Township has a really good team, so when we compete with them we will be undefeated until we go against them I feel like,” Barr said.

Fanelli and Barr has both had injuries this season.

“My weaknesses would be my injuries because I would be doing all the events if I didn’t have arthritis. Having arthritis isn’t helpful when I’m competing because it makes my arms and elbows a bit weaker. When I perform I get nervous at times, but I’ve been doing gymnastics since I was four but then retired when I was twelve due to pain in my elbows then I got back into gymnastics when I was fifteen,” Barr said.

While competing all four years at the high school, senior Hannah Shaffer has stayed undefeated in her meets.

“It feels good to be undefeated and knowing that the work we put in pays off. If we lost a match, I would be surprised and disappointed because we’ve held that title for a long time. We can make it to states because we’ve made it all four years. I’ve been competing on the high school team and I also feel confident in my teammates. When you work hard together, you can put together a good team and stay undefeated,” Shaffer said.

As a gymnast, Shaffer feels that she has had experiences that she’s learned along her high school career that has helped her form new friendships.

“Experiences I’ve learned would be how to be confident and do what I know I can do and make new friendships while competing. There’s a lot of pressure but when I get to compete, it all comes naturally and I feel more confident and relaxed once I’m in my element. I hope to keep trying my best and to be proud of myself and my teammates. I also hope to stay undefeated,” Shaffer said.

As Shaffer’s high school career comes to an end at the end of the season, she has decided that she will not be pursuing her gymnast career when she enters college.

“I’m excited to compete this year but also sad because I’ve been doing it for a while. I’ve been doing gymnastics since I was three for club gymnastics, but four for high school gymnastics. I’ve been a gymnast for a long while and my body is worn out and stressed so I don’t think I will be pursuing my gymnast career when I enter college,” Shaffer said.