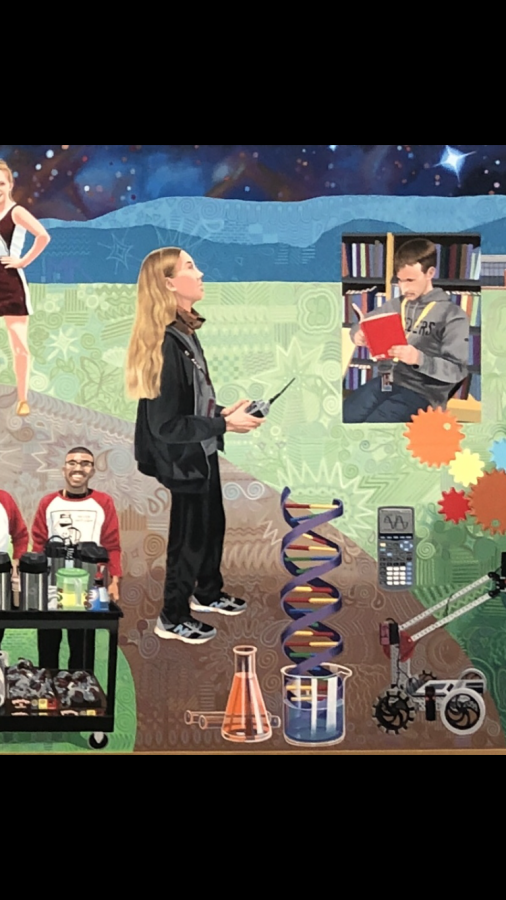 Gallery|5 Photos
Amy Dean
One section of the mural features a student flying a drone with a remote control.

In the beginning of fall of 2021, art teacher Kathryn Curry and her class were asked by principal Andrew Neely to cover a blank wall in the entrance of the B building. They finished the mural in fall of 2022.  Current students look at the mural and will be able to appreciate it for years to come.

“After Mr. Neely had asked me to come up with an idea for the mural, I knew I couldn’t do it myself. I had reached out to a local artist named Deb who does different types of murals. We co-taught and co-planned alongside each other and with some of my students from my painting classes and my art for public places classes,” Curry said.

Students from all types of activities were features including: coffee cart workers, athletes, academic activities, artists, musicians. Other objects representing the school were also included like someone the mountain lion, logos, calculators, drones and other things that show an idea of this school.

“I am fortunate to have the space and opportunity to paint a mural that will be on the wall for a very long time. I’m also very grateful for the support that my students and I have received from the school. We also got materials and other supplies that were used for the mural and that was very helpful,” Curry said.

Images on the mural are painted but are inspired from actual images that Curry and her students asked people for.

Senior Rachel Scheinberg painted and helped out with the mural. She painted the mural at the start of spring 2021 last year and painted again at the end of fall 2022.

“I feel really accomplished and proud to be a part of the mural. I painted many things including the background, the track runner, coffee cart items and shirts, trees, etc. I am so proud of the mural. The piece looks great and it really presents the main ideas and activities that AAHS has. My goal was to help with a little of each image, my motivation was the legacy that is going to carry through the years in the building and my dedication is from my love for art and my aunt’s inspiration,” Scheinberg said.

Senior David Kenney appeared on the mural as one of the chorus students.

“I think it’s really cool that my face is plastered on a mural or a wall and that I’m there forever. The picture definitely looks like me. They did a really good job with the covers and the color option was great. I did not know that I was going to be on the mural. I walked into school one day, and I was shocked to see myself in it. On the mural, I was supposedly singing,” Kenney said.

Senior Dustin Leonard was also on the mural reading a book.

“I feel honored, this is because I’m now on a mural forever and future kids won’t know me, but certain kids will and that’s what matters to me. I feel that they did a really good job matching my description on the mural. The image on the mural portrays me really well,” Leonard said.

The mural had just finished at the beginning of this year and Leonard had discovered he was on the mural half way through the school year.

“I did not know that I was going to be on the mural. I kindly helped with the space part of the mural. After the mural was mostly done this year, I saw that I was there, and I thought that was really cool. I felt really epic after seeing the mural. I thought it symbolized the school very well and it was so, so cool. They also went beyond with the paintings,” Leonard said.