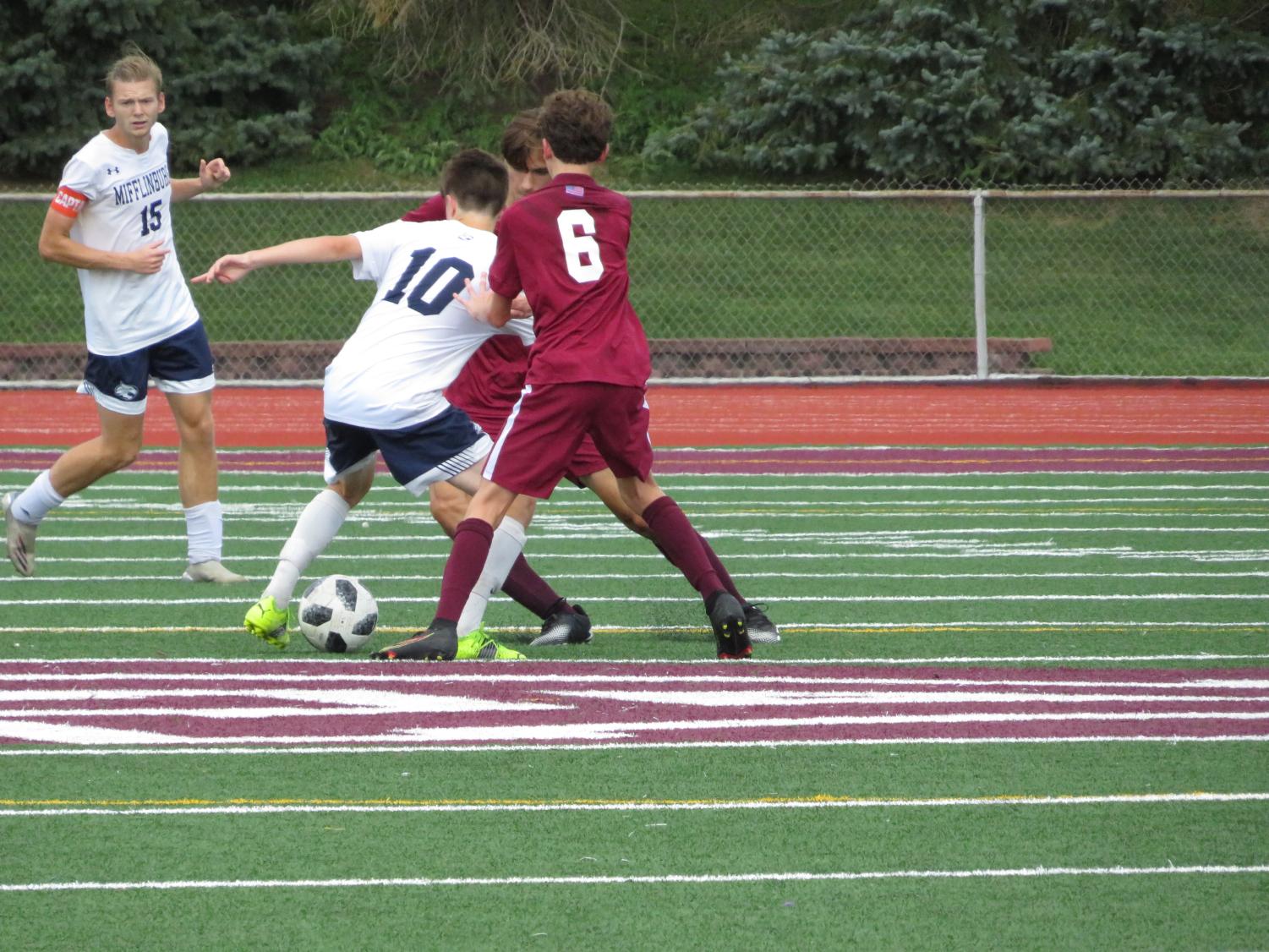 It’s our time. Players from Altoona try to steal the ball from the opposing team. (Jaidyn Palladini)

It’s our time. Players from Altoona try to steal the ball from the opposing team.

On Sept. 6, at 6:30 p.m., the boys’ varsity soccer team took on the Hollidaysburg soccer team at Tiger Stadium. The team reigned victorious with a final score of 3-1.

Prior to the win, Altoona had struggled to beat their rival team, Hollidaysburg, in previous seasons.

“We beat them twice in 2020, but we have not beaten them at Hollidaysburg for a long time,” head coach David McCarter said. “It was great to lift some of the feeling that games are tougher to win there. The field is the same size as ours, but it just can have a psychological effect to play in hostile territory. It is such a credit to our character that we shut out the noise and distractions and took care of business.”

As the season approached, the boys practiced Monday-Friday, from either 6-7:30 p.m. or 7:30-9 p.m. During each practice, the boys worked on everything they could, such as scrimmages and drills to prepare them for upcoming games.

“We have been in practice sessions starting Aug. 15,” McCarter said. “One of the things we are proud of as a program is that we get fit enough to play at a maximum level at the end of matches. We try to have the mindset that we will never get out of work, and we are fit enough to put in a hard 80 minutes.”

As the team progresses through the season, McCarter hopes the team accomplishes every goal.

“My hope is that they continue to work and enjoy the season,” McCarter said. “It is so satisfying to see such a committed group work so hard to get better and grow. They will continue to play for each other and succeed.”

Sophomore Kallen Plunket takes in the win against their rival.

“It feels really good to beat Hollidaysburg since they are our rivals, but we unfortunately lost to them last year,” Plunket said. “It was unfortunate, but looking back at this game, it gives me a sense of confidence.”

While some players don’t take the time to warm up, Plunket makes sure to make sure he’s ready.

“To prepare myself for the game, I do stretches and do some drills where we shoot,” Plunket said.

Plunket believes he does so well with his teammates by his side.

“My biggest source of motivation is probably my teammates since they support me and help me out through the game,” Plunket said.

Sophomore Justin Bossler believes that the team works better than past seasons.

With the season still going on, Bossler believes that they can be successful for the remainder of the season.

“I think that if we play the same way that we did against Hollidaysburg, I think that we should do pretty good,” Bossler said.

Bossler plans to better himself for this season, despite how well the team is doing.

“My biggest goal is to probably score more goals than last year,” Bossler said. “I also just want to work better in my position.”

Sophomore Luke Mitchell had confidence in the moment before winning.

“My favorite part of the game was probably that third goal because it kind of sealed the victory, but we could’ve won either way,” Mitchell said. “Once we got that third goal, I knew that we were going to win.”

Mitchell looks off of his past mistakes to improve.

“The part that helped me improve the most was probably the part where they scored because I learned from my mistakes, and that type of goal probably won’t happen again,” Mitchell said.

Mitchell feels practice pays off for everyone.

“Practice is the main reason I am a starter,” Mitchell said. “The fact is that we also don’t have as many kids on the team, but if you don’t show up to practice, you’re not going to get played. Practice generally just makes you a better player, so it’s really important to show up.”