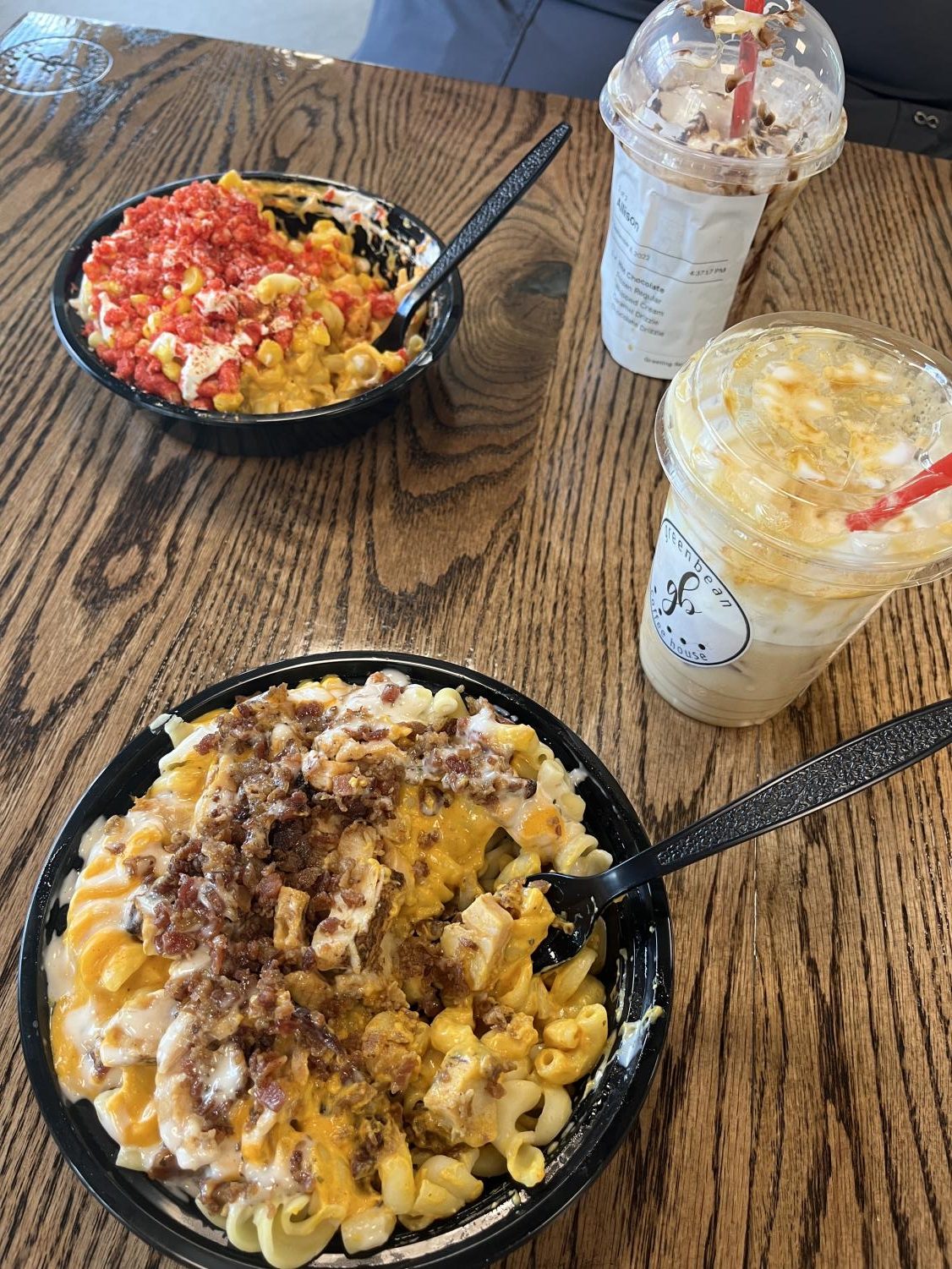 On June 11 2022, the Greenbean Coffee Shop relocated, but with a new addition: 33 on Mac. This new addition allows the consumer to have a bowl of mac, cheesecake and a coffee to-go or dine-in.

At first, when I heard there was going to be a new Greenbean with 33 on Mac, I wasn’t expecting much to be different, just a newer building with the same menu and added mac and cheese. I had heard of the 33 on Mac company joining in the establishment and was intrigued. Coffee and mac and cheese is not a commonly heard of combo. To be fair, bitter and salty doesn’t sound the best, but that discussion comes later.

I have been to the original Greenbean plenty of times, with my usual order being a frozen Greenbean Mocha or one of the varying fruit smoothies. The old building is cozy and perfect for just hanging out, working etc. I always enjoy going to that one, even though the new building is just as close, because it has a lot of good memories tied to it. The workers at both buildings have been amazing.

The new building is great too, I love the layout and how many seats there are. It reminds me of when a teacher has a cozy corner in his or her classroom and then desks to actually work at. The new building has a nice cozy area and also higher seating in a separate room which gives a great variety.

Before the review, I had never gone to the new building, but I had been curious about what it was like. I live pretty close to the building, and I watched it be completed as the months passed.

As soon as I walked in, I was glad to find a similar layout to the old building but more spaced out. Then you get to see the mac and cheese and cheesecake bar itself. I didn’t know there was cheesecake there until after I had gotten my food, but they’re right next to each other and not hard to miss. I never heard anyone talk about the cheesecake, just the mac and cheese. It was a pleasant surprise.

The process of getting your mac is fun to watch. Seeing the components go into the mac makes it so much more worth it because you actually know what’s going in it unlike, say, a pre-packaged mac. They start with noodles, cheese sauce, then your toppings. I got the Street Corn mac and the Chicken Bacon Ranch mac.

Here is the link to their online menu, where buyers can find varying mac and cheeses and choose what their favorite is, or even make a new combo.

Starting with the Chicken Bacon Ranch mac and cheese. There is absolutely no going wrong with pasta, cheese, chicken, bacon bits and ranch together. Just hearing it sounds good. I liked it, but it wasn’t my favorite. The pasta was cooked to al-dente, and it was perfect. The cheese sauce was warm and was a good amount of rich and salty and didn’t taste like fake cheese or a pre-packaged mac. The sauce itself was super thick and coated the pasta well. Then the chicken; the chicken was so good. If I could buy a container of chicken I absolutely would. The chicken was amazingly seasoned and wasn’t a fake chicken. One of my biggest pet peeves with food and chicken, is when I hope for real chicken, and I get that spongy nonsense. I purposely chose a mac with the chicken to test what it was like, and I am so glad I did. If there’s one thing I would go back for it would be the chicken. You could actually shred it and not see weird spongy bits and the flavor was great: salty, juicy and tender. It almost reminds me of a really fancy rotisserie chicken. Next is the ranch and bacon bits. Store brand bacon bits never quite look right or taste right. 33 on Mac has true bacon bits. That is revolutionary for a restaurant, seeing as most just buy store brands and call it a day. I hate when bacon is soggy or not crisp, and these bacon bits were perfect for me. There was no uncooked fat, and it was crispy. It tasted just like bacon: salty. The ranch kind of got overpowered by salt in the dish, but I could still taste it in the dish. I hate certain ranches, but theirs is super good. Overall the individual components are amazing, and I would lovet hem with other pairings, but when I ate it all together, it was not my favorite flavor profile. Something about the cheese and ranch together bugged my taste buds, but it was still good.

The next mac I got was the Street Corn mac. If there is a mac and cheese I could eat all day every day, it would be this one. I have never had street corn before, so I can’t make a comparison of the two, but this mac was delicious. It had the same pasta and rich cheese sauce, but with sweet corn, tajin, sour cream, parmesan cheese and flaming hot Cheetos. If someone is picky, this might sound disgusting but no, wait, I will convince them otherwise. So the base, great, could eat it alone and still like it. But when you add the sweet corn, it goes to the next level. I am absolutely a huge fan of having something salty and in the same dish having something sweet to break it up. [If I haven’t mentioned yet, I am a super picky eater] This mac with just corn alone is superior to any mac I’ve had before. The corn just adds a new level that I never knew I could love so much until then. Then the parmesan, sour cream, tajin and flaming hot cheetos come. To be honest, I didn’t taste the parmesan cheese, maybe I was focusing too much on the color and main flavor profiles to notice. The flaming hot Cheetos and sour cream stuck out a lot. I really liked the cold sour cream on the hot mac, making it creamier and cooling it down. I love sour cream and the sweetness really added another layer of flavor onto the mac that I loved. The hot Cheetos added an amazing crunch and added spice that really sent this mac over the top. I also couldn’t really taste the tajin, but that might be because it was on top of the sour cream, which is fine. Tajin, from what I’ve been told, is salty and spicy. Nothing wrong with that. Maybe adding more tajin would benefit more, or putting it in the mac first then adding the sour cream would make it more noticeable. But the Street Corn mac and cheese is my number one favorite mac. I love the sweet, spicy, creamy, crunchy aspects of the mac. Definitely my favorite.

So out of the two mac and cheeses, would I get them again? The Street Corn one definitely. I would have to be craving ranch on cheese to get the Chicken Bacon Ranch mac. Not that it was bad, just that I would want to try something else instead. [I would definitely get the chicken though at least.]

Do I recommend you go get a mac and cheese? Absolutely, it was a great experience, the food was good, the workers were nice, and the atmosphere was nice and welcoming.

Just make sure to wash down the mac with a beverage from Green Bean. [I personally got a caramel nut latte on ice]