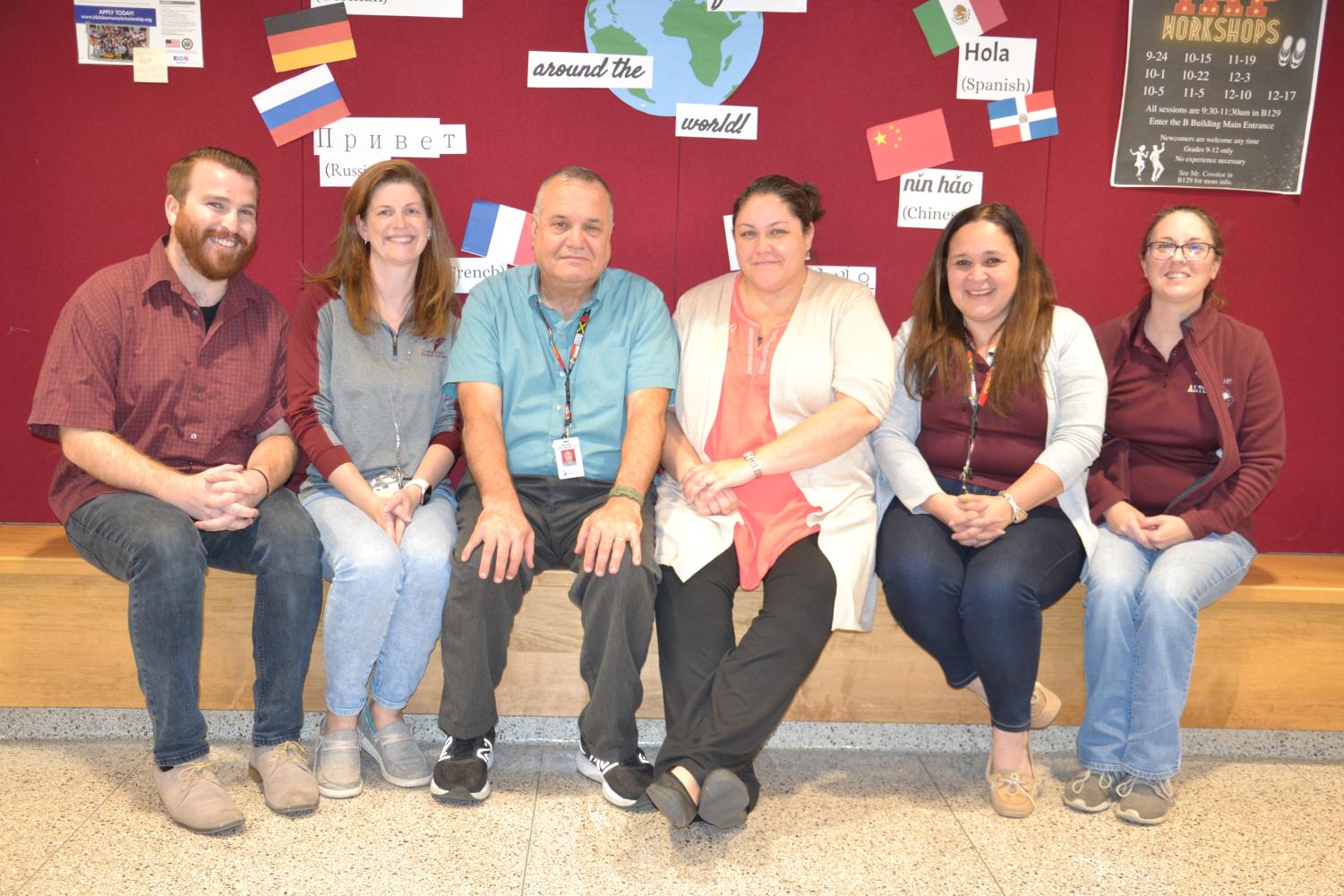 She joined the department seven years ago. He joined the staff two years later. A fascination with languages brought both of them to the same place. 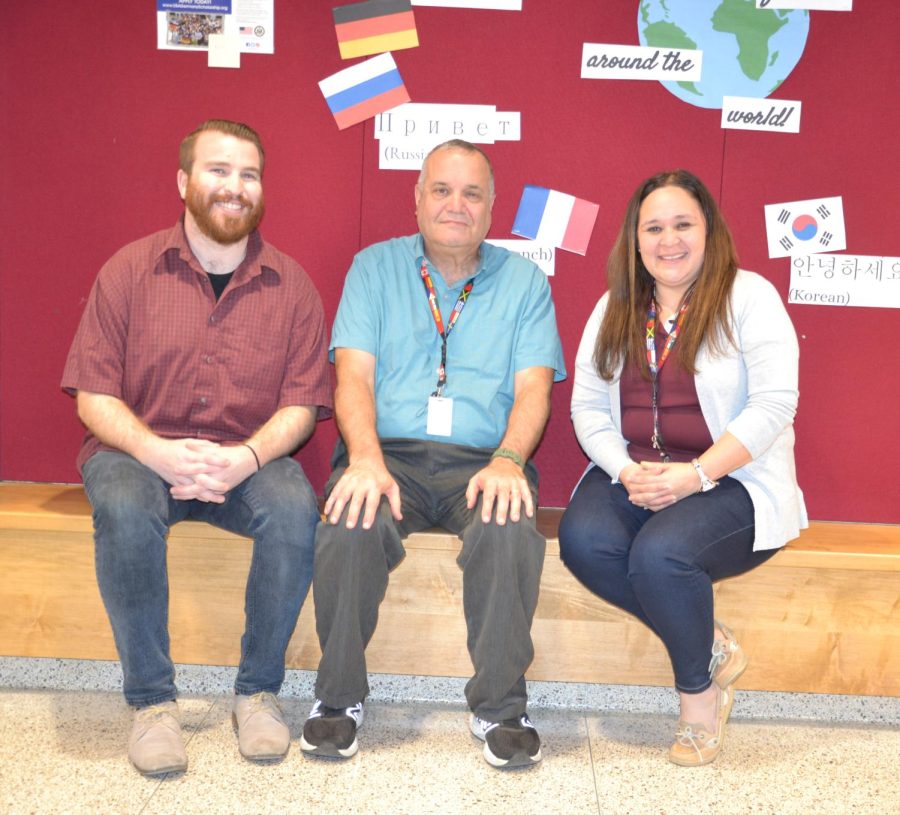 ¡Hola! Dane Leone, Mark Petrarca, and Patricia Leonard comprise the Spanish portion of the languages department. Teaching Spanish has been a dream come true for Leonard. “One of the things I guess I always wanted to do is to not only learn about other cultures, but also teach about my own culture,” Leonard said.

Leonard started teaching 20 years ago, seven of which she has spent teaching Spanish at Altoona. She attended Saint Francis University and received a master’s degree in education as well as her certification degree to teach Spanish.

Leonard is originally from Central America. She studied at the University of Honduras and earned a degree in social and judicial sciences prior to moving to the United States.

Leonard’s interest in teaching started from a young age. She recalled the times she would play pretend as a child.

“Since I was little, I always remember playing with my sister. We would play that we were teachers. Every opportunity we had we’d do volunteer work. We had to do some volunteer work in secondary school and in high school, and I remember that I took every chance I had to work with kids and help them,” Leonard said.

Leonard’s sister also decided on a teaching career path. She teaches at an elementary school in Honduras. Both of them continued to learn English throughout their high school years.

“I remember when [my sister and I] were in high school we would always take English classes. There were private school programs that were offered after school for people to learn English. We always were excited about learning English and actually more. We learned French and also a little bit of German,” Leonard said.

Learning about other languages and cultures has interested Leonard for quite some time. While attending the University of Honduras, her curiosity of English prompted her to study abroad.

“I always liked to learn other languages and about other cultures. I wanted to learn English, so I came to the United States. There was a program at the University of Pittsburgh in Pittsburgh along with an ESL program. I was really inspired. I really wanted to learn more about the language and the culture,” Leonard said.

[Being from another country] definitely gives me that ability to share life experiences with the students, [including] the language, the music, the art, and everything that I grew up with.”

Leonard has always wanted to not only learn about other cultures but teach about her own culture as well. She found a job in Altoona that allows her to do just that.

Leonard feels that being from another country helps her share Spanish culture with her students.

Leonard believes that seeing how much students grow throughout the school year is the most rewarding part of teaching.

“I really like to see how much Spanish the students know, especially at the beginning of the year. It’s really rewarding to see how much they grow throughout the year until the end of the year when we’re able to have a conversation or just to see how much they can learn. I always tell them how many opportunities learning a second language will bring them, so that’s definitely one of my favorite [parts of teaching],” Leonard said.

Leonard encourages anyone to travel to other parts of the world when given the chance.

“I would definitely highly recommend, if you have the opportunity, to travel to other parts of the world. It really gives you an opportunity to really learn. It changes your life once you learn this or once you see how other people live and things that are happening in other parts of the world. It really changes your perspective of how society is and it gives you a very unique perspective in any area, whether it’s for working, traveling or personal enrichment,” Leonard said. 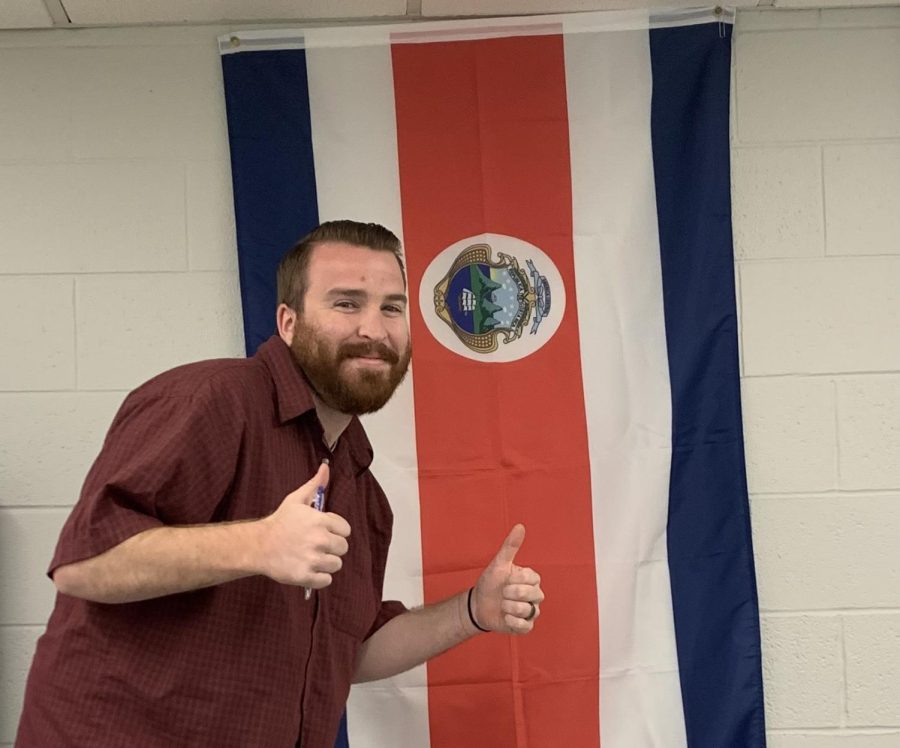 Thumbs-up! Leone has a flag of Costa Rica displayed in his classroom right above his desk. Learning Spanish has allowed him to get to know and help people that he previously would not have been able to converse with. “Once you get to a point where you can actually use the language and speak it and listen to it effectively, it literally and figuratively opens up a door to an entire other group of people that you previously were not able to have communication with,” Leone said.

Leone started teaching five years ago, all five of which he has spent teaching Spanish at Altoona. He attended Penn State University in State College, Pa.

Leone’s ancestry started his passion for languages. His Cuban side of the family sparked his interest in Spanish.

“There’s a story my family likes to tell. My aunt speaks Spanish. When I was three years old, I was looking at her all strange when she was speaking Spanish. I climbed up on her lap, put my fingers in her mouth and opened up her mouth… [asking] where are these [words] coming from? I didn’t really start to become really passionate about [Spanish] until college, I would say, but the interest for both the language and the culture was definitely there since elementary school,” Leone said.

In his first year of college, Leone started working with the orientation program at Penn State. The program inspired him to take a teaching career path.

It might not be daily but having another language and some tools to speak and to listen to in your back pocket is going to eventually become beneficial.”

Through his studies at Penn State, Leone also had the opportunity to study abroad. In his junior year of college, he lived in Santiago, Chile for five months.

“Because I wanted the Spanish practice, I did live with the host family,” Leone said. “That helped a ton because you would have dinner with people who only spoke Spanish, no English, as compared to being in a dorm with a bunch of English-speaking people who might force you to speak a little more English than you wanted to.”

After Leone graduated, he was searching for a large public school that was halfway between his home and his college. He found what he was looking for in Altoona.

Leone enjoys the time he spends in school interacting with students the most.

“I’ll be the first to tell you I absolutely hate going home and lesson planning and grading and all that stuff, but I’ve never had seven and a half hours go quicker than a school day because you’re always moving around. You’re always helping someone. You know us language teachers, we don’t like [sitting] behind our desk and just kind of teaching from there. We’re always up and moving and helping, acting things out and drawing on the board and all that fun stuff. So although it is a little cliche, it’s really true. It’s the time between eight o’clock and 2:40 that I enjoy the most,” Leone said.

One obstacle Leone faces is that a lot of his students don’t see a need for them to use Spanish in the future. Leone wishes that more people would see the value of learning another language.

“I have a brother in law. He speaks Spanish very well, and he was at a gas station out towards Philadelphia one day and this Hispanic mom and her daughter, their phone was dead. They didn’t have money to buy a charger or anything, and they were lost and confused. He was able to help them get back to Washington, D.C. from Philadelphia and that would not have been possible without the use of Spanish. It’s things like that you never know when you’re going to have to use. It might not be daily but having another language and some tools to speak and to listen to in your back pocket is going to eventually become beneficial,” Leone said.