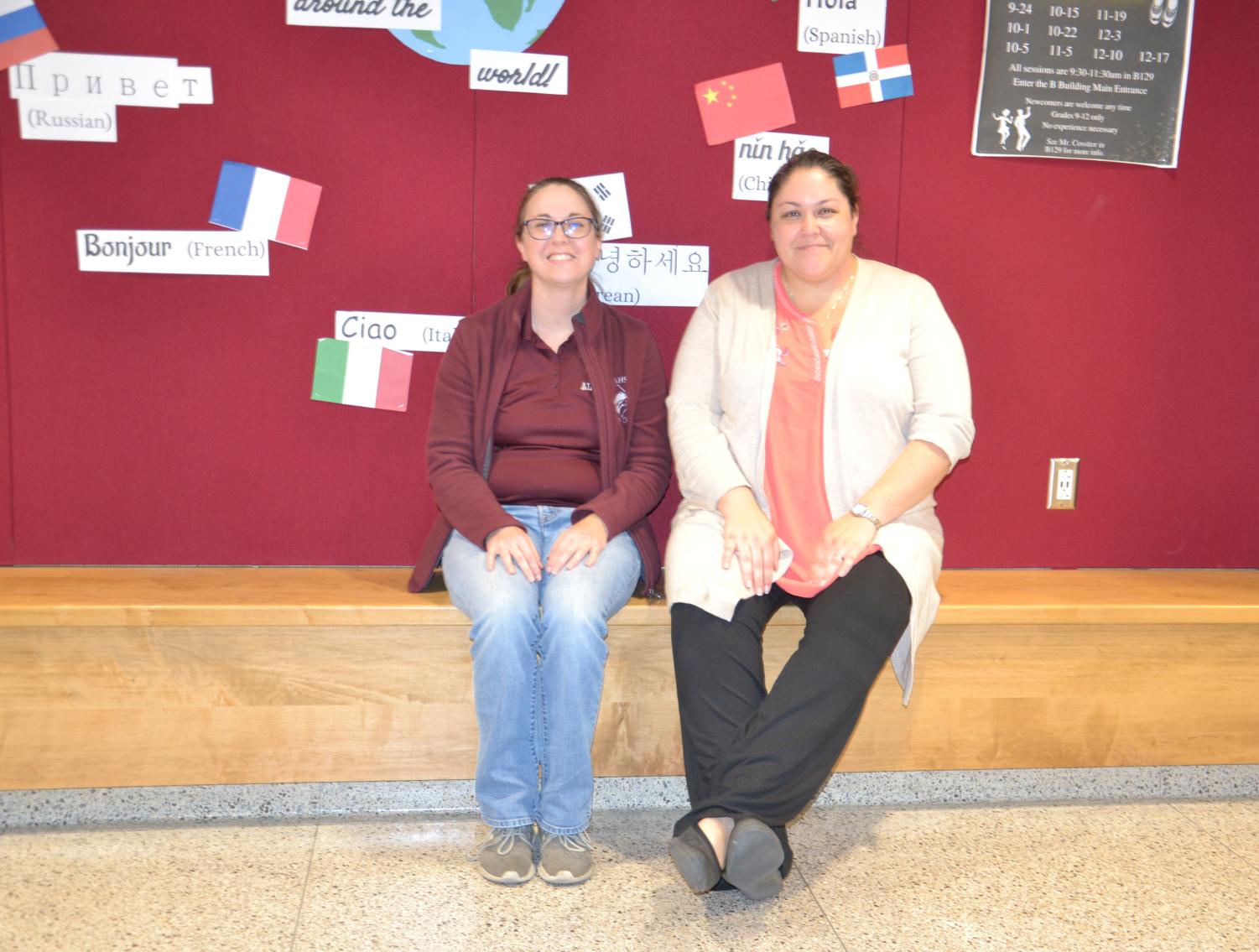 Bonjour! Veronica Skomra and Jessica Patton comprise the French portion of the languages department. Skomra has organized field trips to deepen the content and culture so that students can learn beyond the classroom. “My favorite part is making connections with students. It doesn’t just have to be with content, it can be in life,” Skomra said. (Melissa Krainer)

Bonjour! Veronica Skomra and Jessica Patton comprise the French portion of the languages department. Skomra has organized field trips to deepen the content and culture so that students can learn beyond the classroom. “My favorite part is making connections with students. It doesn’t just have to be with content, it can be in life,” Skomra said.

The bell rings. Veronica Skomra looks up at her class. Jessica Patton prepares to teach about adjectives.

Together, they’re ready to provide students with a foundation in French. 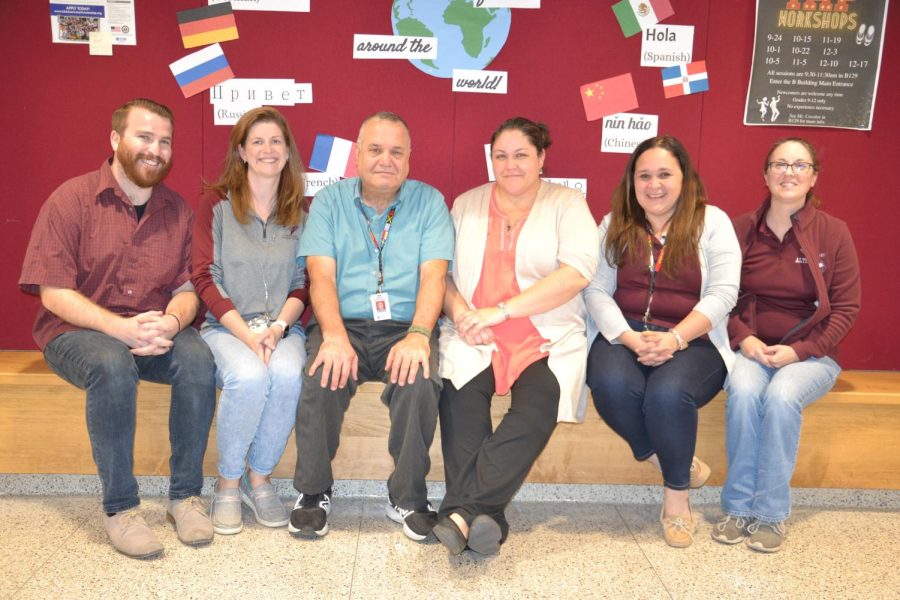 Skomra attended Indiana University of Pennsylvania (IUP) and St. Francis University. Her dream to become a teacher dates back to her childhood.

“I think I’ve known since I was really young, just because I have a little sister. I kind of played the teacher role all the time when we were younger. It’s kind of funny. I mean, having good teachers in school helped, too. The bad teachers told me what not to do. I like making a difference in people’s lives,” Skomra said.

A teacher in high school inspired her to take a French teaching career path.

“I had one really good teacher in high school. I stuck with [French], and I really liked it. I also like to be different, too. I don’t like to do what everybody else is doing. I just kept at it [French]. I didn’t know for a long time what I was going to do. I knew I was going to be a teacher, but I didn’t really know it was going to be French until the end of high school,” Skomra said.

In 2010, Skomra studied abroad for one semester in France. This college experience as well as certain classes helped her comprehend French.

“I mean, at IUP we had to take methods classes, which honestly those actually helped, and just taking language courses in college. Studying abroad really made it easier for me. It’s just easier to learn that way [because] you’re immersed,” Skomra said.

After college, Skomra decided to teach in Altoona after two years of teaching at a different school district.

“The former school district that I worked for ended up getting rid of the program. It just so happened that Altoona had an opening right after that happened,” Skomra said.

One thing that Skomra values is bringing an original experience to the classroom.

“Something that’s important to me as far as teaching is giving [the students] authentic experiences and opportunities outside of the classroom setting, because oftentimes we focus on content. That’s not always what you want to do. This is why I’m offering that trip to France,” Skomra said. “I run the foreign language club. We take several field trips throughout the year for that. I can tell you that in the last couple of years since I’ve taken over for FLC our numbers have grown exponentially. I really enjoy it.” 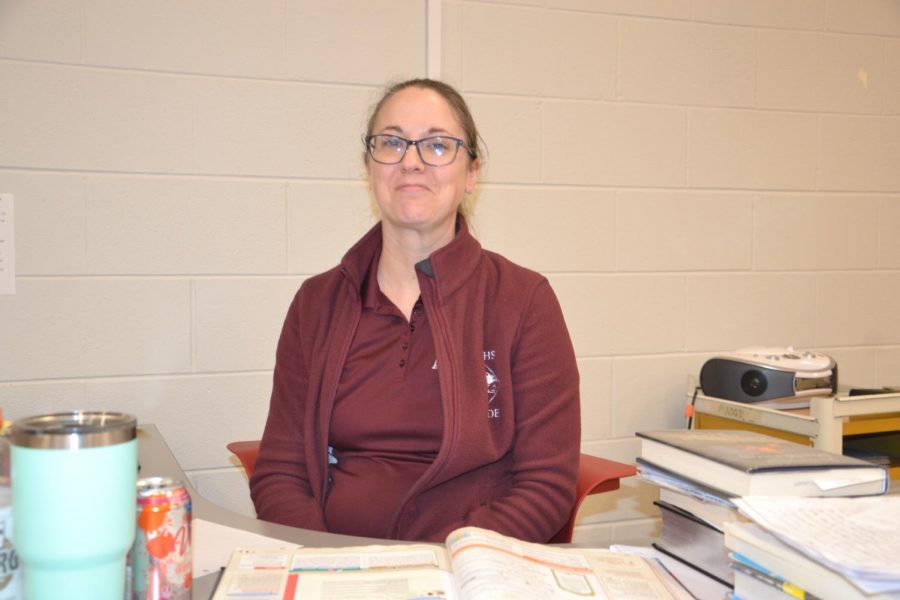 Prep. Patton prepares teaching materials for her students. In order to further her understanding of languages, she took a sabbatical last year. “[My favorite part about teaching is] just interacting with the kids and watching them learn new things, having them be interested and excited by it like I was,” Patton said.

Patton attended Juniata college for her undergraduate degree and Georgia State University for her graduate studies. Patton earned her English as a Second Language (ESL) certification from Penn State.

“I was lucky that I had a very wonderful high school French teacher and a very wonderful French professor when I did my undergraduate degree. They both really seemed to enjoy teaching and being around kids. They really seemed to enjoy what they were doing, so I just ended up really liking French because of them,” Patton said. “Later on, I actually taught English in France for a year. Before, I had never realized that it might be something I would actually like, and then I actually tried teaching and I really enjoyed it. That sort of inspired me to do what I could teaching French.”

Patton studied abroad during college: once as an undergraduate and once as a graduate student. She stayed with the host families both times. Afterwards, she returned to France and lived abroad for a year. This was when she realized she wanted to become a teacher.

“[I realized that I wanted to be a teacher] when I moved to France and was teaching English as a second language, and I really enjoyed it. I wouldn’t really say that there was one moment, just sort of the overall experience was very positive, and I enjoyed being around the kids. I enjoyed doing what I was doing,” Patton said.

In high school, Patton had to select from three different languages. She was looking for something unique; in the end, her choice evolved into a career.

If anybody enjoys school and interacting with others, I would encourage those people to become teachers.”

“I knew I wanted to do a foreign language, and I wanted something a little bit different. At my [high] school, they only offered French, Spanish and Latin, and I knew that I was not interested in Spanish. I really wasn’t interested in Latin because it’s not really a spoken language. So French was the only other option,” Patton said.

After teaching in France, at a university, at a public school and at a private school, Patton decided to return home and take a French teaching position in Altoona.

“I was in a position where I was looking for a job and I thought it would be nice to move back to be close to my family who still live in the Tyrone area. It just all worked out. Altoona needed a French teacher and I was happy to move back,” Patton said.

Patton encourages anyone who enjoys working with others and likes learning new things to go into the teaching field.

“I would just say if anybody enjoys school and interacting with others I would encourage those people to become teachers, even if it would be another subject matter,” Patton said.