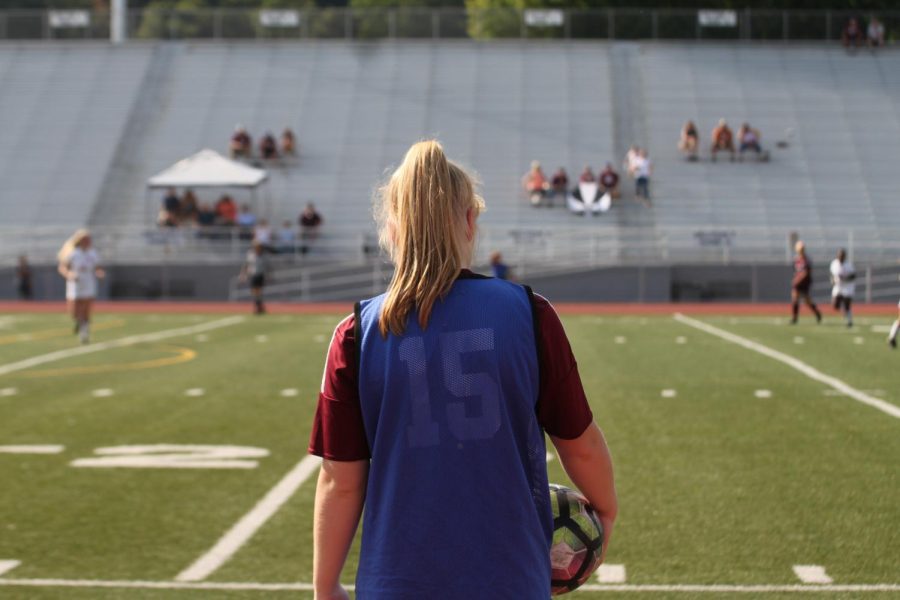 The game begins. On Saturday, Sept. 21, sophomore Rebecca Dull watches closely as her team fights for the ball against Williamsport. The game started at 3 p.m., at Baker Mansion.

“This sport is more than just a hobby for me. I have met all of my closest lifelong friends because of it and learned so much like time management, how to be responsible and how to be a leader. It has shaped me into the person I am today,” senior Jessica Worley said.

For Coach Ralph Winterburn as well, soccer goes deeper than just a sport.

“[Soccer is] about making a person, not just a player and balancing those two. I love all the kids on the team. These girls would burn through a brick wall if it was going to win them a game,” Winterburn said.

This year is Winterburn’s fifth season as the soccer team’s mentor. Prior to this, Winterburn coached the JV girls’ soccer team for four years.

Winterburn coaches closely with the team, meeting with the players for three months before the season. The early start allows Winterburn to develop a comfortable coach-to-player-relationship with his team.

“Coach Winterburn pushes us to always do our best and to not allow the way our competitors are playing affect how we play our game. He makes us want to do better,” junior Julia Lane said.

With so many months of coach-to-player bonding, the players also had time to create a relationship that would benefit their communication and collaboration as a team.

They all have a place in my heart and our whole team is so lucky because we get to have a team that is bursting at the seams with skill, and an entire extended family that most people don’t [have].”

“This year, our team started something new where the juniors on the team are partnered with a freshman, and we ‘mentor’ them throughout the season with anything they need help with, school or soccer-related. We also do a lot of team bonding nights throughout the season as a whole to get closer. We’re like a family,” junior Darrian Berkheimer said.

Communication is a major aspect of Winterburn’s coaching.

“During halftime and after the game, I’ll have 10-15 minute conversations with my team. I’ll ask, ‘Did we do well?’ and ‘What do you think?’ so I can see their perspective and hear their opinion,” Winterburn said.

The team practices daily as they carry out run-throughs and discuss the upcoming games. Film sessions take place every Friday in order for the team to observe their performance and acknowledge both their strengths and their weaknesses.

“Coach Winterburn has been working with us throughout the season to increase our speed of play, attack and defend as a team, and switch the point of attack….In the past few years of being on the team, I’ve become better with passing accuracy, taking shots on goal, and communicating on the field to my teammates,” Berkheimer said.

I love all the kids on the team. These girls would burn through a brick wall if it was going to win them a game.”

“I think our team is doing really well this year so far and have a good feeling we will go far into the playoffs. Coach Winterburn pushes us a lot to do our best, but also understands our limits,” senior Delaney Crider said.

For seniors, this is their last season part of the girls’ soccer team.

“Knowing it’s my last season with this team and school, I have been playing every second of every game and practice with no regrets and with everything I have in me,” Worley said.

The last season for Worley isn’t just about playing until it’s over, she’ll also spend the season bonding with her teammates with what time she has left.

“The thing I will miss the most is my family. All the underclassmen have become more than just a teammate or a friend, but an actual part of my family who will all be missed so much. They all have a place in my heart and our whole team is so lucky because we get to have a team that is bursting at the seams with skill, and an entire extended family that most people don’t [have],” Worley said.

The girls’ soccer team still has four games remaining to finish the season. Despite the limited time the seniors have with their teammates, their bond will extend past the season. 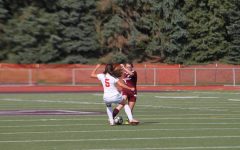