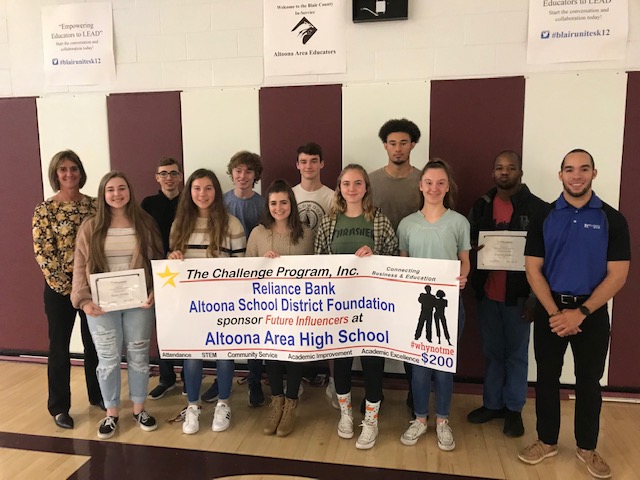 On Oct. 31, the high school held an assembly revolving around the Challenge Program. Pictured on the far left is guidance counselor Sue Fox who manages the Altoona Challenge Program. Students that followed the five requirements of the program were awarded a $200 check during the fall assembly.

The Challenge Program helps students whose hard work may go unnoticed by awarding $200 to qualified participants.

As the school year progresses, classes can become more stressful for students as homework and classwork assignments begin to increase in number. For most students, there may be a feeling of never-ending madness perhaps without purpose; however, the Challenge Program gives meaning to all the dedication students put into their school work.

The Challenge Program, Inc. is an organization that awards students through financial support, essentially rewarding students for proper school conduct and devotion to their education.

“The student body needs to know that they are all eligible to win these checks. On the student body’s behalf, they need to know if they work hard and do the right things, first of all, that’s a reward in itself, but second of all, they could get paid for doing it,” assistant principal Shane Cowher said.

The program provides $200 to any student who follows these five qualifications:

That’s another thing we want–a reward program for everybody. I know a lot of students get sick and tired of seeing the same people winning. This is trying to expand that and represent the entire student body.”

Guidance counselor Sue Fox manages Altoona’s Challenge Program, keeping the school connected with the organization by randomly picking and awarding the cash prize to the students who followed the five conditions.

“A $200 check is made out to them. It’s not to the school or to a teacher. The check is literally made out in their name,” Fox said.

Junior Kasey Schultz was awarded $200 during the Challenge Program assembly. By working hard to achieve her prize, Schultz recognizes the benefits of the program.

“I think other students should try to participate in the program because it challenges you to either better yourself or your community. The program helped me recognize the good I was doing for my community, and it helped me put money toward my college funds,” Schultz said.

The award process does not exclude students with lower GPAs or lower grades. The program searches for students who have bettered themselves over time, meaning students who have improved from last year have the ability to cash a $200 check.

“It’s open to any student. [Fox] will get a print out of all the students who have perfect attendance and then randomly pick. That’s what I think people need to know–that it’s not just for a certain group of people. Anyone could win the $200 if they tried,” Cowher said.

For the most improved GPA, the program isn’t looking for students with the highest GPA; instead, they are rewarding those who have improved from last year. Students need to have a three percent to five percent GPA improvement from last year to fit the qualification.

The same applies to the top 10 percent condition, which is based on all classes: honors, academic and non-academic.

“It doesn’t just appeal to the first three students with the highest average,” Fox said.

Community service is the only condition that requires application forms to be submitted to Fox. For community service, volunteers don’t need to have a large number of hours in order to qualify or meet the conditions.

“Anybody that volunteers can put in for that community service; it’s not like you have to have 300 hours a year. We’ve had years where kids have volunteered 10 hours with their church or Boy Scouts and that’s what gets them in,” Fox said.

The Challenge Program has been partnered with Altoona High since 2005, as well as partnering with Reliance Bank and Norfolk Southern.

The program helped me recognize the good I was doing for my community and it helped me put money toward my college funds.”

Despite the many years, the Challenge Program has been associated with Altoona, students fail to take advantage of the program’s benefits.

“That’s another thing we want–a reward program for everybody. I know a lot of students get sick and tired of seeing the same people winning. This is trying to expand that and represent the entire student body,” Cowher said.

The Challenge Program provides financial support for students who apply dedication and determination to their everyday school life. The program itself was created in order to encourage students to more fully participate in school, both academically and socially.