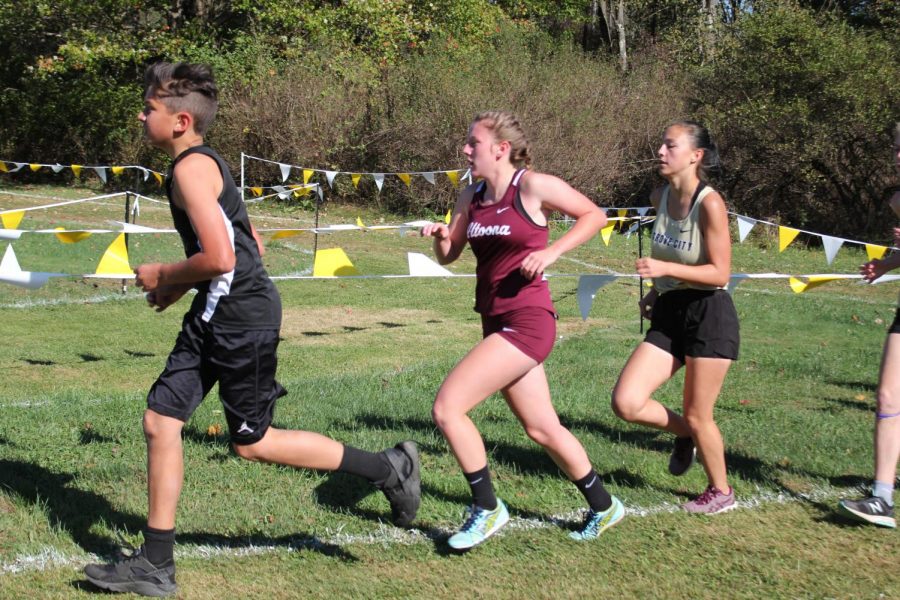 Run Senior Kylee Wisor starts the race at a meet during the girls’ cross country season. Her and fellow teammate senior Emily Rentz was inspired to create a race for their senior project.

Every year seniors are asked to create various types of projects known as the ‘senior project.’

Students can choose from a variety of ideas for their projects.

Seniors Emily Rentz and Kylee Wisor chose to organize a race involving a 5K run and a two-mile walk as their project. All proceeds will benefit the Central PA Humane Society.

The race will occur on Dec. 7 at 9 a.m. at the Rails to Trails Flowing Spring Station. People who choose to participate in the race must pay an entry fee of $15 with t-shirts being provided for runners registered by Nov. 23.

Rentz and Wisor picked this idea for their senior project because of their running experience.

“It was actually a couple of years ago that we realized we should do a race because one of our teammates did it for her senior project, and we thought it was cool,” Rentz said.

“We both have seen so many races from running cross country, so we really just wanted to organize one ourselves,” Wisor said.

The racing shirts will be the color red and have the saying “Prancing for Pets” with a dog on them.

The decision to give the proceeds to the Humane Society was important to both Wisor and Rentz.

“Well me and [Emily] Rentz are both very big animal lovers; I think we will have lots of people from the cross country team and runners from the community that will participate,” Wisor said.

“Because we felt like animals deserve more than they get, and animals help people in positive ways so why not return the favor for them,” Rentz said.

The race will be set up in age groups.

This will be an out and back race.

Wisor and Rentz feel positively about the turn out for the race.

“We have about 10 people so far pre-registration. I think the registration will succeed, but I feel like the race will turn out good,” Rentz said.

“We have handed out several registration forms and have many people in the process of registering to participate,” Wisor said.

Both Rentz and Wisor believe the runners can achieve something out of the race.

“I hope everyone sees that running is really a sport that can bring everyone together. We can all share in the hard experience of running a race or even walking one together,” Wisor said.

“I hope people realize that doing something for a cause will make you feel better about yourself,” Rentz said.

Rentz and Wisor hope to have a positive impact on people’s lives through their senior project.