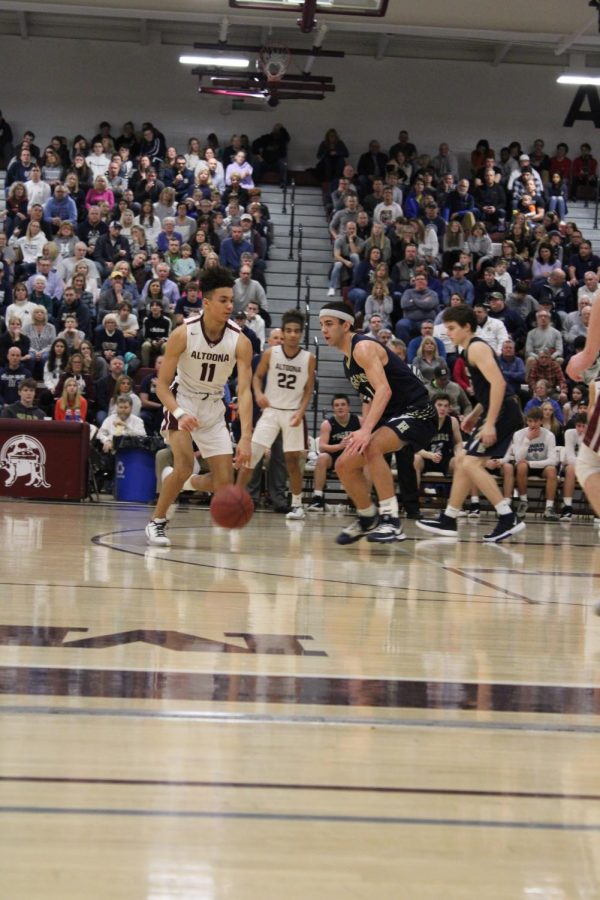 Focus on the Game Senior star boys’ basketball player Kennth Futrell dribbles the basketball down the court against Hollidaysburg. Futrell accomplished many goals he set for himself in his high school basketball career.

Senior star basketball player Kenneth Futrell shows his athleticism through his playing skills on the court. Maintaining the ability to be a student-athlete for one sport is challenging enough considering the amount of time it takes and in the environment of competition.

Futrell began his career in basketball during fourth grade and continues to thrive as the season progresses. One reason for Futrell’s success is his athletic family background.

“My sister played in the Women’s National Basketball Association, and my family is all athletic. I naturally fell in love with the game the more I went with it,” Futrell said.

Futrell has occupied the point guard position since seventh grade.

“I felt like being a leader is more of a ‘my thing.’ While during seventh grade my coach put me in that position, and I have loved it ever since,” Futrell said.

To be successful in basketball, Futrell believes he has to be prepared for each and every game. Preparation comes through many forms that help Futrell be ready physically and mentally.

“I watch a lot of films, watch the opposing team, our team and practice to make sure I am better than I was the day before,” Futrell said.

Futrell, through watching film and practicing, contributes to the teams’ succes

“I have always had a competitive edge to me since I was young, but being able to go out and compete and win with my brothers is a whole other feeling,” ”

s and his personal statistics.

“I average around 15 points per game with three assists. I am focused on how the team is doing, and we are doing pretty well this year in the big 10,” Futrell said.

“I have always had a competitive edge to me since I was young, but being able to go out and compete and win with my brothers is a whole other feeling,” Futrell said.

Playing like a family motivates Futrell during the season.

“I love [my teammates], and we are all family. When we win, I could not be happier,” Futrell said.

Futrell believes that being a leader on and off the court is an important quality to have as a great teammate.

“I feel like I am a leader on and off the court. No matter what anyone is going through I am always willing to sit down and talk about it. It starts off the court first,” Futrell said.

During the games, Futrell puts all of his emotions out on the court. Futrell’s love for the game shows the most when scoring.

“Being a student-athlete is definitely stressful; maintaining my grades, attendance, etc. So life skills like that improve tremendously throughout the years,” Futrell said.

Futrell has learned a lot through his coaches that will stick with him in the future.

“Having the coaches I had, especially Coach Jarrod Klausman, has taught me a lot not just in basketball, but in life. I took in a lot from him being a dad, a coach and a mentor in which I look up to him,” Futrell said.

With all of his success, Futrell is still waiting for his plans to play college basketball in the future.

“Yes, I do plan on playing basketball in college. I enjoy basketball very much, but I am still waiting for a couple of colleges that I have talked to. After this season, I will see where everything goes from there for my future,” Futrell said.

Futrell’s accomplishments throughout his high school basketball career create short and long term goals for him.

“Some short and long term goals are to have a positive winning record and winning a D-six title,” Futrell said.