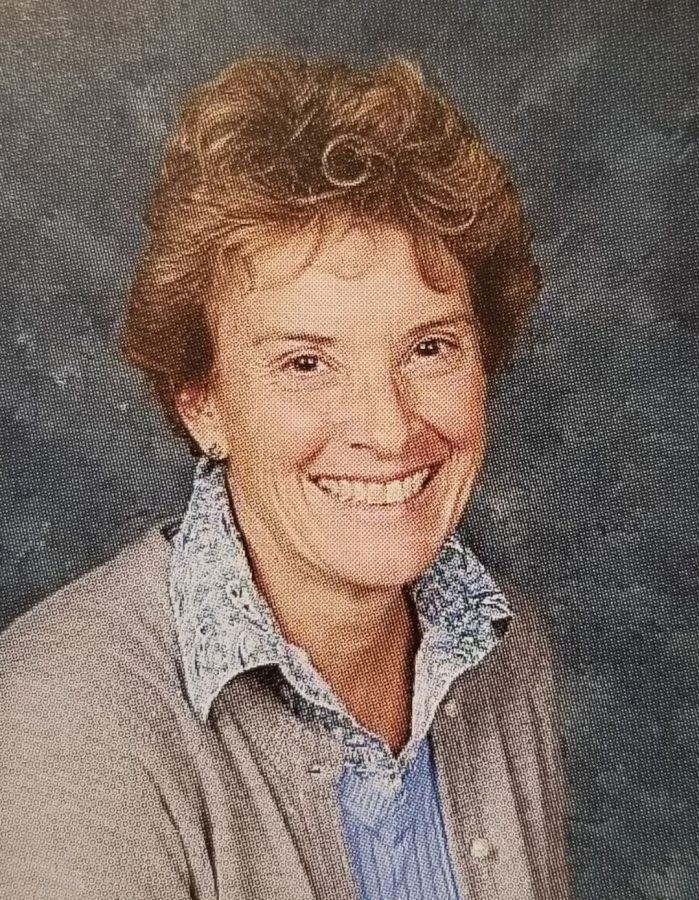 English teacher Tina Johnston will be retiring this year.

This year, English teacher Tina Johnston is retiring after spending 26 years at the high school.

Before Johnston became an English teacher, she started her career at the parochial school, St. Rose of Lima, teaching math for eight years until she received her certification to teach English from St. Francis University.

Johnston’s transition from math into English came from her passion for the subject.

“English was always my first love. I love to read, I love to write, and so I pursued it,” Johnston said.

Johnston became involved with the Altoona school district as a swimming coach, and then felt a connection with the students, leading her to teach her first year of English at the high school.

“I was coaching swimming at Altoona and I really wanted to teach there because I wanted more contacts to build the swimming program, and I fell in love with the kids on my swim team and with the school district,” Johnston said.

As for coaching swimming, Johnston had to put swimming aside in order to focus on her English classes.

“Around 2000, my schedule changed and became more intense with the English teaching. I picked up more difficult and intense classes and it was hard to balance coaching and teaching. It broke my heart, but I had to give the coaching up,” Johnston said.

Altoona provided Johnston opportunities to become a part of state and national conferences.

Johnston is a member of the National Conference of Teachers of English (NCTE). With the conferences, she has been to Philadelphia, Atlanta, Houston, Lancaster, Pittsburgh and many other cities.

But for Johnston, the best opportunity she was given was her students.

“Altoona has always been so supportive. The biggest thing to me is that the district provided me the opportunity to work with some of the best kids, ever. My colleagues are outstanding as well,” Johnston said.

“I’ve always had such wonderful kids. Celebrating Shakespeare’s birthday with my students was always a highlight of the year. We also would do something with Mary Shelley’s Frankenstein and have a gothic Halloween celebration, we would study Charles Dickens and take a look at Victorian England. When Mrs. [Tanya] Lucas was a English teacher, she and I would take our kids on a field trip to the Flight 93 Memorial. That was definitely a highlight,” Johnston said.

Although Johnston has so much love for her students and the school, she, like many other teachers, won’t be able to say their final goodbyes to the students and teachers of the high school.

“If I did get the chance to say goodbye to the students, I would tell them to be strong, I would thank them for being so wonderful and making my last year of teaching so amazing. I would just tell them to keep staying strong and to follow their dreams, because I always tell them ‘you have to follow your dreams,’” Johnston said.

Students of Johnston also are unable to give thank you’s or say their goodbyes to her, but for many of her students, Johnston has made a long lasting impact during their senior year.

“She is one of my favorite teachers. She helped me more with school than she understands. I’m glad I had her as my teacher for my last year at the school and I hope life continues to be an adventure for her,” senior Chelsea Jordan said.

“Mrs. Johnston was one of the nicest teachers I have ever had. She cares about her students and also made class fun. Whether it was with Mountain Monsters or normal work, she made it fun,” senior Brett Thaler said.

Once she retires, Johnston hopes to give back by volunteering, specifically with the dog community.

“I’m a big dog person, I do agility with dogs so I’m going to be doing some dog training for agility, perhaps get a puppy, too. I’m looking into some volunteer work, also something with dogs. Maybe like the Humane Society,” Johnston said.

Along with her volunteering, Johnston plans to check a few things off of her bucket list she’s been meaning to do.

“My students know this about me–I am a busy freak. When Disney reopens, I want to go when it’s not crowded and when everyone is at school–that’s a big thing on my list. I want to travel and see Rome and the Mediterranean,” Johnston said.